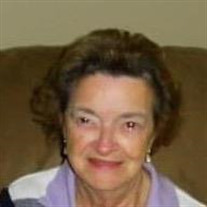 Adala M. White, 92, of Wapakoneta, died 9:40 p.m., Thurs. Dec. 2, 2021, at Lima Memorial Health System. She was born May 27, 1929, in Logan WV, the daughter of Emery & Molly (Browning) Toler, who preceded her in death. She was married to Roscoe White, and he died in 1984. Survivors include, 8 children, Roger, Donald, Jewel, Brenda, Robert, Randy, Greg, Tammy, 27 grandchildren, 57 great grandchildren, & 7 great great grandchildren, a brother, Richard “Dickey” Toler. She was preceded in death by 5 children, Connie, Alva, Ricky, Roscoe, Jr., and Clifford Ray, 3 brothers. Jimmy, Jack, and Cletus, and a sister, Ermadean. Adala retired from the Auglaize Acres after 29 ½ years of service. She enjoyed walking, exercising, and spending time with her grandchildren. Funeral services will be 2:00 p.m., Tues. Dec. 7, 2021, at the Eley Funeral Home & Crematory, St. Rt. 501, Wapakoneta. Burial is to follow in the Resthaven Memory Gardens, near Moulton, OH. The family will receive friends 12 p.m. until time of the service Tues. at the funeral home. Memorial contributions may be directed to the charity of the donor’s choice. Condolences may be expressed at www.eleyfuneralhomeandcrematory.com.

The family of Adala Maxine White created this Life Tributes page to make it easy to share your memories.

Send flowers to the White family.