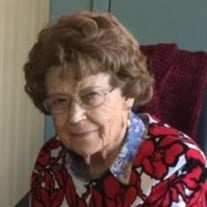 Ann Catherine (Reinhart) Wagner, 94, of Wapakoneta, passed away 4:10 p.m., Sun. March 22, 2020, at The Gardens of Wapakoneta. She was born Nov. 29, 1925, in Jay Co., IN, the daughter of Peter & Cecelia (Schritz) Reinhart, who preceded her in death. On July 17, 1943, she married Gerald F. Wagner, and he survives. Other survivors include, 6 children, Joy (Dick) Fishpaw, Wapakoneta; Roger Wagner, Columbus, OH; Robert Wagner, San Antonio, TX; June (Vernon) Litmer, Miamisburg, OH; Randy Wagner, Albuquerque, NM; Joan (Jon) Weaver, Columbus, OH; 9 grandchildren, 12 great grandchildren, & 6 great great grandchildren; a sister, Ruth (Vernon) Brackman, Minster, OH.; a brother, Joseph (Doris) Reinhart, Bryant, IN. In addition to her parents, she was preceded in death by 2 brothers, Rev. Robert Reinhart, Victor Reinhart, and infant bother and sister, Lamont and Genevieve Reinhart. Ann was a member of St. Joseph Catholic Church, Wapakoneta, and a loving and proud mother of 6 children. She was very creative in so many ways. She made wooden crafts, and made hundreds of Catholic rosaries that were given free to many, especially to people in New Mexico. She also made jewelry and gave to many. In the days of coal furnaces, she would use the burnt down coal called “clinkers” to make model caves to house The Nativity scene of Jesus, Mary, and Joseph at Christmas. Ann could cook or bake anything, and was especially known for her spaghetti, fired chicken, and caramelized sweet potatoes. She could also make absolutely anything grow, including sweet potatoes weighing up to 20 pounds, swiss chard with the leaves a foot long, huge beets, and sugar cane for molasses. She also worked with Gerald to build four homes, from the ground up, in Bryant, IN, Coldwater, OH, Celina, and Wapakoneta. While living in Coldwater, she maintained Gerald’s business for years as he serviced televisions and preformed electrical work for his client population. Gerald and Ann made gallons of wine, from their own grape arbors. They would also make wine from dandelions. Ann was especially proud of the accomplishments of her children and grandchildren, and spoke of them everywhere where she went, especially at the checkout counter at Aldi’s store. Ann’s family loved her dearly and bids her farewell into the arms of Jesus. Due to the current health crisis, Ann’s funeral services will be at a later date. Memorial contributions may be directed to St. Joseph Catholic Church. Arrangements are being conducted by the Eley Funeral Home & Crematory, Wapakoneta, where condolences may be expressed at www.eleyfuneralhomeandcrematory.com

The family of Ann Catherine Wagner created this Life Tributes page to make it easy to share your memories.

Send flowers to the Wagner family.