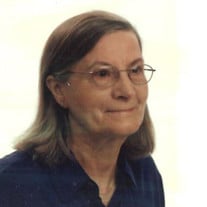 Audrey Bertha Stearns, 87, of Wapakoneta died at 4:00 p.m. Tuesday, September 22, 2020, at Wapakoneta Manor. She was born June 1, 1933, in Englee, Newfoundland, daughter of Augustus and Janette (Fillier) Cull and they preceded her in death. On... View Obituary & Service Information

The family of Audrey B. Stearns created this Life Tributes page to make it easy to share your memories.

Send flowers to the Stearns family.