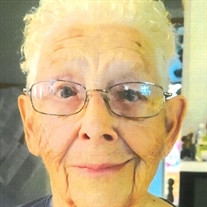 Barbara J. Mullett, 86, of Wapakoneta, passed away as she wished, peacefully in her sleep early Saturday morning, Oct. 9, 2021. She was born Jan. 4, 1935, in West Newton, OH, the daughter of the late Dallas V. & Thera F. (Campbell) Knoch. On Feb. 28, 1977 in Clintwood, VA, she married Dewey C. Mullett, and he preceded her in death on July 31, 2015. Barb is survived by one brother, Robert “Pete” Knoch, The Villages, FL. Other survivors include, 4 sons, Kenneth Cummins, Wapakoneta; Randy Cummins, St. Johns; Don (Irene) Cummins, Wapakoneta; Ron (Jeannie) Cummins, Centennial, CO; and a daughter, Terry Kantner, Shawnee. She is also survived by 2 step-daughters, Lodina Childers, and Juanita Fox, and her best friend Linda Black (as she stated “her oldest child”) of Wapakoneta. Barb was blessed with 12 grandchildren, 29 great grandchildren, 2 great great grandchildren, with her 3rd due in March 2022. She was preceded in death by a sister, Bernida Evans, 2 brothers, Dallas Knoch, Emmett Knoch, 2 step-sons Thomas Mullett, Tandy Mullett, a grandson, Ronald Cummins, Jr., and her children’s father, Donald E. Cummins, Sr. Barb was an astonishing woman. After graduating from Blume High School in 1953, she raised a family and found her niche as a sales lady. She enjoyed flea markets, craft shows, garage sales and dealing with the public. She crocheted and sold her wares to most everyone. Barb never met a stranger, but most of all she loved her family, her grandchildren, and was so proud of them ALL. Funeral services will be 10:30 a.m., Sat. Oct. 16, 2021, at the Eley Funeral Home & Crematory, St. R.t 501, Wapakoneta. Burial is to follow in the Greenlawn Cemetery, Wapakoneta. The family will receive family and friends 2-4 & 6-8 p.m., Fri. Oct. 15, at the funeral home. Memorial contributions may be directed to the American Cancer Society. Condolences may be expressed at www.eleyfuneralhomeandcrematorycom.

The family of Barbara Jean Mullett created this Life Tributes page to make it easy to share your memories.

Barbara J. Mullett, 86, of Wapakoneta, passed away as she wished,...

Send flowers to the Mullett family.