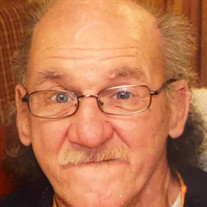 Danny Lee Ullery, 67, of Lima died 11:45 p.m., Wed. March 10, 2021, at Carecore of Lima. He was born Aug. 29, 1953, in Dayton, the son of Jack & S. Kathryn (Maggert) Ullery. His father, mother and step-father, Kathryn (Larry) Searfoss are deceased. He was married to Kathy Ullery, and she is deceased. Survivors include, a brother, Stephen Ullery, Dayton, 2 step-sons, several nieces & nephews. He was preceded in death by a brother, David Ullery. Danny worked with several area restaurants and in construction. He was a 1972 graduate of Fairmont High School, Dayton. Funeral services will be 2:00 p.m., Sat. March 13, 2021, at the Eley Funeral Home & Crematory, St. Rt. 501, Wapakoneta, with Pastor Josh Tissot officiating. The family will receive family and friends 1-2 p.m., Sat. at the funeral home. Condolences may be expressed at www.eleyfuneralhomeandcrematory.com.

The family of Danny Lee Ullery created this Life Tributes page to make it easy to share your memories.

Send flowers to the Ullery family.