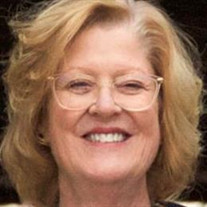 Darlene K. Adams, 65, Celina, passed away at 7:45 p.m. Monday, Aug. 2, 2021. She died in profound peace, with the blessed assurance that Christ had called her home. She was surrounded by her husband, sons, daughters-in-law, granddaughters and a longtime family friend. Also present was one of her ministers, Ken Meyer of New Horizons church in Rockford, who prayed over her as she drew her final breaths. Darlene was born Jan. 11, 1956, in Wapakoneta to Dale & Mary Ann (Myers) Thomas, who still reside in Wapak. On July 19, 1980, she married Ronald Adams of Celina, who survives. She is also survived by her two sons, Douglas (Kelli) Adams of Celina and Eric (Annalyn) Adams of Connersville, Ind.; her five grandchildren, Emma & Ruby Adams and Jaedyn, Linkin & Brooklyn Waterman, all of Celina; her sister, Denise (James) Kantner of Wapakoneta and her nieces, Angela (Joe) Kraft of Paris, Ohio and Alaina (Mike) Vecchio of Chicago, Ill. Additional survivors include her brother-in-law, Michael (Kimberley) Adams of Celina; her nephews Brayton & Brecken Adams of Celina and her mother-in-law, Frances Adams of Ottawa. She is preceded in death by her father-in-law, Kenneth “Ray” Adams, and her mother-in-law, Betty Adams. Darlene graduated in 1974 from Wapakoneta High School. She then went on to earn degrees from Ohio State University in 1978 and Wright State University in 1984. She was an educator at the Wapakoneta City School District for 35 years, during which time she nurtured the minds of myriad second-graders. Throughout her career she also remained active in the Alpha Delta Kappa teacher’s sorority. Education forever remained Darlene’s principal passion, and immediately following her “retirement” in 2013, she began working at the TLC Learning Center in St. Marys. Outside of the classroom Darlene was a deeply involved member of St. John Lutheran Church in Celina, where she belonged to the bell choir, Stephen Ministry and Monday night Bible study. Darlene was also a member of the Phi Beta Psi Sorority, Iota Psi Chapter, an organization that raises money for local cancer patients and cancer research. She was president of the sorority during 2020-21 - remaining committed to her duties even while she fought her own battle with pancreatic cancer - and previously held many other offices. For ten years she served as chairperson of the sorority’s Singing Valentine fundraiser. Darlene loved riding bikes with Ron - a pastime they enjoyed both locally and at Mackinac Island, Michigan. She also enjoyed planting and maintaining flowers, and hosting frequent family dinners. Darlene was a gracious and loyal friend, and she touched countless lives through the organizations she served. The vision of her smile and the music of her laughter will be forever etched in the hearts of anyone who knew her well. A celebration of life will be held on Saturday, Aug. 28, at St. John Lutheran Church. Time for visitation and remembrance will be from 10 a.m. to 1 p.m. that day, with the celebration of life service to immediately follow. A meal will take place directly after the service at the church. In lieu of flowers, memorial donations may be given to the Stephen Ministry of St. John Lutheran Church, and/or Grand Lake Hospice. Darlene will be inured by the Eley Funeral Home of Wapakoneta, so that her ashes may be scattered together with Ron’s at a later date.

Darlene K. Adams, 65, Celina, passed away at 7:45 p.m. Monday, Aug. 2, 2021. She died in profound peace, with the blessed assurance that Christ had called her home. She was surrounded by her husband, sons, daughters-in-law, granddaughters and... View Obituary & Service Information

The family of Darlene Kay Adams created this Life Tributes page to make it easy to share your memories.

Send flowers to the Adams family.