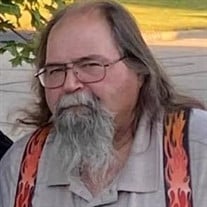 David Allen “Tiny” Brannan, 66, of Spencerville, passed away on Sept. 17, 2021 following a brief illness. Born Dec. 5, 1954 in Lima to Elmer C. “Jack” and Iva Irene (Krites) Brannan, Tiny was defined by his creativity and imagination. He loved tie dye, sci-fi, and a good conspiracy theory. His unique personality is what drew people to him, and him to others. A kind soul by nature, Tiny spent 30 years volunteering for the fire department in Saint Johns, outside Wapakoneta where he grew up. When he wasn’t volunteering or meeting friends for coffee (or his go-to Dr. Pepper), Tiny was either creating things or fixing things. He spent his recent years working on cars at Dude’s Rod Shop or creating things—from painting jewelry to making toys, most often for five special women that he thought of as daughters, and their children. Tiny is survived by his longtime partner, Michele Miller, of Spencerville and her children: Heather (Shane) Klingler of Napoleon; Jessica (Jerry) Poppe of South Beloit, Ill.; Nikki (Frank) Miller-Licht of Smyrna, Tenn.; Ashley (Paul) Miller of Lima; and Courtney (Chad Murray) Miller of Northbridge, Mass. He is also survived by eight grandchildren, brother-in-law Steve (Connie) Kinstle, of Wapakoneta, and sister-in-law Dev Brannan, also of Wapakoneta, four nieces and one nephew. His parents, sister Nancy Kinstle and brother James Brannan all preceded him in death. At the decedent's request, there will be no public services, though a celebration of life may be held at a later date. Memorial contributions can be made to the Spencerville Invincible Fire Department. Arrangements are under the direction of the Eley Funeral Home & Crematory, Wapakoneta. Condolences may be expressed at www.eleyfuneralhomeandcrematory.com.

The family of David A. "Tiny" Brannan created this Life Tributes page to make it easy to share your memories.

Send flowers to the Brannan family.