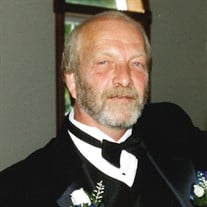 David A. Perrine, 70, of Lima, died 10:12 a.m., Sun. Jan. 19, 2020, at Mercy Health- St. Rita’s Medical Center, from injuries sustained in an auto-truck accident. He was born May 16, 1949, in Lima, the son of Anthony & Jean (Brun) Perrine. His mother survives in Lima, and his father is deceased. Other survivors include, 3 sons, Kyle (Mindy) Perrine, Kraig (Angie) Perrine, Kristian (Christy) Perrine, all of Lima, 4 grandchildren, Kody (Jordan) Perrine, Astasha Perrine, Kyle, Jr. Perrine, Konner Perrine, 2 great grandchildren, Kyson & Kora, siblings, Debbie Perrine, Marijo Sunderhaus, & Jon Perrine, all of Lima, a sister-in-law, Judi Perrine, Spencerville, former wife, Susan (Bill) Perrin, Lima. In addition to his father, he was preceded in death by a brother, Ronald Perrine. Dave was a 1967 graduate of Lima Central Catholic High School and served 4 years in the U.S. Air Force. He held several jobs leading up to his ownership of Lima Carpenters. He was a member of St. Gerard Catholic Church, Lima. He was a member the Lima Bowling Assn. Hall of Fame, and the Fraternal Order of Eagles, Aerie #370. Dave was an avid bowler, recording several 300 games, and a mentor to bowlers of all ages. He could fix anything, enjoyed watching golf, and caring for animals. Most important to him, however, was his family and grandchildren. The family will receive family and friends 5:30 p.m. -7:30 p.m., Fri. Jan. 24, 2020, at the Eley Funeral Home & Crematory, 1102 Lincoln Ave. (St. Rt. 501) Wapakoneta. Military rites will be conducted by the Wapakoneta V.F.W. Post #8445, 7:30 p.m., Fri. at the funeral home. Memorial contributions may be directed to Kristian Perrine, for a special project in Dave’s memory. Condolences may be expressed at www.eleyfuneralhomeandcrematory.com

The family of David Anthony Perrine created this Life Tributes page to make it easy to share your memories.

Send flowers to the Perrine family.