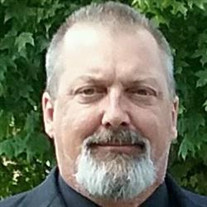 Dennis Staskiewicz, 50, of Wapakoneta, died 12:45 p.m., Sun. Dec. 22, 2019, at the Mercy Health St Rita’s Medical Center, Lima. He was born Sept. 20, 1969, in Omaha, NE, the son of Jim & Marta (Jones) Staskiewicz. His parents survive in Omaha, NE. On Aug. 13, 2003, he married Theresa Brauer Greve, and she survives. Other survivors include, a son, Brad Marcks, TN, a granddaughter, Olivia Marcks, a grandmother, Millie Cornell, AZ, a mother-in-law, Carol Brauer, Botkins, OH, 3 sisters, Jennifer Wrobleski, Jenna Staskiewicz, Jill Staskiewicz, all of Omaha, NE, several nieces & a nephew, and many cousins. He was preceded in death by his father-in-law, William A. “Bill” Brauer. Dennis had previously worked for Pepsi Cola, Lima. He was a Veteran of the U.S. Army. Dennis was a member of the Ohio Gold Prospectors Association. An avid outdoorsman, he enjoyed hunting and fishing. Funeral services will be 5:30 p.m., Mon. Dec. 30, 2019, at the Eley Funeral Home and Crematory, St. Rt. 501, Wapakoneta, Pastor Charla Grieves officiating. Military rites will be conducted by the Wapakoneta V.F.W. Post #8445, at the funeral home following the funeral service. The family will receive friends from 2-5 p.m., Monday at the funeral home. Memorials may be directed to the St. Rita’s Hospice. Condolences may be expressed at www.eleyfuneralhomeandcrematory.com.

The family of Dennis Staskiewicz created this Life Tributes page to make it easy to share your memories.

Send flowers to the Staskiewicz family.