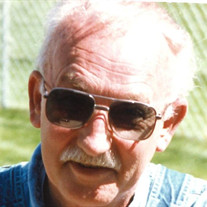 Donald Eugene Ainsworth, 77, passed on Wednesday, July 24th at Lima Memorial Health System, from complications of a stroke. He was born on February 25th, 1942 in Ohio City, Ohio to John ("Fred") & Phyllis (Prichard) Ainsworth, who preceded him in death. Don married Nancy (Barber) Ainsworth on August 20th, 1966 and she survives in Wapakoneta. He is also survived by his daughter, Sara Jane Ainsworth, son Jason (Tonya) Ainsworth, and grandson Gavin Quin Ainsworth. Additional survivors include sisters Barbara Mager and Dora (John) Hoffman, a brother, Mike (Connie) Ainsworth, and sister-in-law Sally (Dave) Barber Wahlers, along with many nieces and nephews. He was preceded in death by father-in-law Ray Barber and mother-in-law Mary Shockey Barber and by a daughter, Tracy Lynn Gayan. Don served in the U.S. Air Force from 1960 to 1968 where he was in the Air Police and honed his trade as an electrician. He then worked at Crown Control in New Bremen and Ford Engine Plant in Lima, from which he retired after 30 years. Don was a tremendous cook and also enjoyed photography, building computers, and spoiling pets. He belonged to First English Lutheran Church, was a lifetime VFW member, and past member of Shawnee Long Rifles. Visitation will be at Eley Funeral Home & Crematory, 1102 Lincoln Ave., Wapakoneta on Sat. July 27, 2019, from 1 p.m. to 3 p.m., with a memorial service immediately following. Pastor Neil Brady will officiate. In lieu of flowers, please contribute to the American Stroke Association and/or your local pet shelter.

The family of Donald Eugene Ainsworth created this Life Tributes page to make it easy to share your memories.

Send flowers to the Ainsworth family.