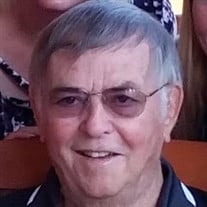 Donald Lynn Numbers passed away at 12:25 p.m., Sunday, April 19, 2020, at the Wapakoneta Manor in Wapakoneta, Ohio. Donald was born on May 31, 1942, in Lima, Ohio to Ernest and Vera (Watt) Numbers. In June of 1965, he married Karen Walther, who survives him. He is also survived by three brothers, Melvin (Sue) Numbers, Kenneth (Jackie) Numbers, and Ernest (Jenny) Numbers. Don was the loving father to Sherrie (Terry) Kah, Julie (David) McGinnis, Tracy (Richard) Blake, and Kimberly (James) Swiecki. He was the beloved grandfather of Mallorie (Chris) Shank, Madelyn and Marissa Kah; Elizabeth, Abigail, and Samantha McGinnis; Mckenzie and Sarah Blake; and Donald and Jonathan Swiecki. Don was a graduate of Cridersville High School, Adrian College, and Eastern Michigan University, where he received his Masters of Education. He spent his career in the Wapakoneta City School District, both as an educator and an administrator. Don was an active member of St. Mark’s Lutheran Church, where he served on church council for several years. Don’s hobbies included both watching and playing sports, especially basketball and tennis. He enjoyed spending time with his wife and his family. A private family service will be held 10:30 a.m., Wednesday, April 22, 2020, at the Eley Funeral Home with Pastor Doug Pretorius officiating. Burial is to follow in the Greenlawn Cemetery, Wapakoneta. A celebration of life service will be held at a later date. The service will be live streamed on the Eley Funeral Home and Crematory Facebook page and the funeral home website. Condolences may be expressed at www.eleyfuneralhomeandcrematory.com. In lieu of flowers, memorial contributions can be made to St. Mark’s Lutheran Church, Wapakoneta, OH.

The family of Donald L. "Don" Numbers created this Life Tributes page to make it easy to share your memories.

Send flowers to the Numbers family.