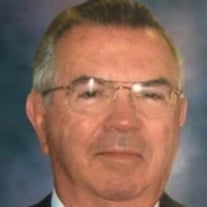 Donald R. “Don” Wittwer, 90, of Wapakoneta, died 2:25 a.m., Sat., Jan. 2, 2021, at Shawnee Manor.  He was born Sept. 16, 1930, in Berne, Indiana, the son of Hiram and Ruth (Schug) Wittwer, who preceded him in death.  On May 7, 1950, he married Rebecca (Nussbaum) Wittwer, and she preceded him in death on Aug. 30, 2000.  Then on July 9, 2005, he married Mary Ann (Metzger Mahoney) Wittwer, and she preceded him in death on Sept. 24, 2018. Survivors include, 4 children, Anita (James) Penhorwood, Lima, Ohio, Dean (Patricia) Wittwer, Aiken, SC, Donna (Jan Castanza) Wittwer, The Villages, FL, Michael (Maria) Wittwer, Malvern, Ohio, and foster daughter, Ann Bruning of Toledo, Ohio. Other survivors include stepchildren, Diana Blackburn, Wapakoneta, Debra Hume, Wapakoneta, Kathleen (Daniel) Umphress, Yardley, PA, Gregory (Tammy) Mahoney, Wapakoneta, and Jeffrey (Emilia) Mahoney, Gahanna, Ohio. His six grandchildren include Aaron (Laura) Penhorwood, Chad (Kara) Penhorwood, Thomas (Lisa) Wittwer, Katie (Jake)Wittwer Gambrell, Adam (Sarah) Wittwer, and Jenna Wittwer. Don had numerous great grand children and two foster sisters, Sonja (Terry) Craig, Mosheim, TN and Linda (Roger) Call, Monroe, IN.   In addition to his parents and wives, Rebecca & Mary Ann, he was preceded in death by a brother, T. Wayne Wittwer, and foster brothers, Rene Brandt, and Dale Brandt, and a foster sister, Alvina Brandt.   Don was as a 1948 graduate of the Monroe High School, IN, and a 1949 graduate of the International Business College, Ft. Wayne, IN.  He moved to Wapakoneta in 1952, and retired in 1995 as treasurer and assistant manager from Mercer Landmark.  Don was truly a man dedicated to service to the Wapakoneta area community.  He served 17 years as a Wapakoneta city councilman and then served as mayor of Wapakoneta from 1991 until 2007.  Don also served on the Auglaize Co. District Solid Waste Management Board, the Civil Service Commission, and was a past member of the Auglaize Co. and State of Ohio Mayors’ Assn.  Don was a member of the First United Methodist Church, Wapakoneta, where he served as a lay leader and chairman of the Administrative Board.  He was a member and past president of the Wapakoneta Lions Club, where he had 56 years of perfect attendance.  He received the Melvin Jones Fellow Award from the Lions Club International, and served as district governor of the Lions Club, International.  He was a 53 year member of the Wapakoneta Chamber of Commerce and served as president in 1966.  Don was a charter member of the Neil Armstrong Airport Authority, and served as co-chairman of the Neil Armstrong Homecoming Committee.  His other memberships included the former Wapakoneta Elks, the Wapakoneta Eagles, the Wapakoneta Dad’s Club, the Auglaize Co. Historical Society, and a social member of the Wapakoneta V.F.W.     Due to Covid 19 health concerns, private family funeral services will be held at the Eley Funeral Home & Crematory, Wapakoneta, with Pastor Josh Tissot officiating.  A private burial service is to follow in the Greenlawn Cemetery, Wapakoneta.  A public celebration of Don’s life is planned for later this year.     The family requests in lieu of flowers, memorial contributions be made to the First United Methodist Church of Wapakoneta and The Wapakoneta Area Community Foundation.

The family of Donald R. "Don" Wittwer created this Life Tributes page to make it easy to share your memories.

Send flowers to the Wittwer family.