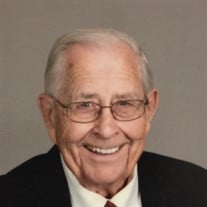 Donald E. Schramm, 86, of Wapakoneta, passed away at 11:29 p.m., Mon. April 30, 2018, at Lima Memorial Health System, with his family at his side. He was born Sept. 12, 1931, in Toledo, OH, the son of Charles E. & Thelma (Cole) Schramm, who preceded him in death. On June 28, 1952, he married the love of his life Helen G. Reed, and she passed away Dec. 10, 2016. Survivors include, 4 children, Robert Schramm, Susan (Gary) Hemmert, both of Toledo, Charles (Sharon) Schramm, St. Marys, & Beth (Randy) Brookhart, Wapakoneta, 9 grandchildren, Jennifer Baker, Maureen Miller, Josh (Amanda) Schramm, Nick (Monica) Hemmert, Matthew Hemmert, Wyatt (Cindy) Neal, Anthony (Tyler Spears) Brookhart, Martin (Andrea) Brookhart, Michael Brookhart, 7 great grandchildren, 2 brothers, Bernard Schramm, Columbus, OH, Marvin (Jean) Schramm, Toledo. In 1975, Don became co-owner and operator of Pantry Pride Food Markets. Prior to that, he had worked at Atlantic & Pacific Tea Company for 27 years, working up the ranks, culminating as the Midwest Region VP. He attended Macomber High School, Toledo, and served in the U.S. Air Force as a drill sergeant from 1951 to 1955. He was an active member of St. Joseph Catholic Church, Wapakoneta, where he served on several committees. Don’s memberships included, Elks #54, Lima, the Fraternal Order of the Eagles, Aerie #691, K of C Council #1272, V.F.W. Post #8445, and the Sertoma Club, all of Wapakoneta. He also belonged to the Shawnee Country Club, and the Wapakoneta Country Club. His hobbies included golfing, traveling over seas, gardening, cooking, and going on fishing trips. He and his wife Helen enjoyed wintering in Florida. He was always there to lend a helping hand to anyone. They hosted families with the Sister Cities program. He and Helen had many extended family members, including the Huffman family. Don was a caring and devoted husband, father, grandfather, great-grandfather and neighbor. Mass of Christian Burial will be 10:30 a.m., Mon. May 7, 2018, at the St. Joseph Catholic Church, Wapakoneta, with Rev. Patrick Sloneker officiating. Burial is to follow in the Greenlawn Cemetery, where military rites will be conducted by the Wapakoneta V.F.W. Post #8445. The family will receive friends 2-7 p.m., Sun. at the Eley Funeral Home & Crematory, 1102 Lincoln Ave. (St. Rt. 501) Wapakoneta, with a time of sharing by family and friends beginning at 6 p.m. Memorial contributions may be directed to St. Joseph Catholic Church Stained Glass Window Fund or the charity of the donor’s choice.

The family of Donald Earl Schramm created this Life Tributes page to make it easy to share your memories.

Send flowers to the Schramm family.