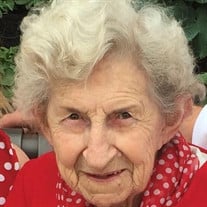 Dorothy J. Pegorch, 95, of Wapakoneta, formerly of Toledo, OH, passed away 6:50 a.m., Sat. Jan. 11, 2020, at her residence, with her family at her side. She was born May 3, 1924, in Toledo, OH, the daughter of Charles Benjamin & Elsie Emma (Leu) Sweet, and they preceded her in death. On Dec. 1, 1945, she married William Walter Pegorch, and he died July 23, 2007. Survivors include, a daughter, Linda Lue Thompson, Wapakoneta, 2 grandchildren, Kim (Les) Bowers, Wapakoneta, and William (Kim) Thompson, Canton, GA, a great grandson, Jordan Bowers, 2 step- great grandsons, Dylan grant & Walker Grant, a brother, Robert Sweet, Perrsyburg, OH, and a sister-in-law, Roberta Pegorch, Holland, OH. She was preceded in death by a son, William Charles Pegorch. Dorothy worked as a self-employed seamstress. She was a member of the First United Methodist Church, Wapakoneta. Her hobbies included sewing, cooking, gardening, and bird watching. However, most important to Dorothy was spending time with her family. Private family services will be held at a later date. Inurnment of her cremated remains will be in the Toledo Memorial Park Cemetery. Memorial contributions may be directed to State of the Heart Hospice, Goldwater, OH. Arrangements are being conducted by the Eley Funeral Home & Crematory, St. Rt. 501, Wapakoneta, where condolences may be expressed at www.eleyfuneralhomeandcrematory.com.

The family of Dorothy J. Pegorch created this Life Tributes page to make it easy to share your memories.

Send flowers to the Pegorch family.