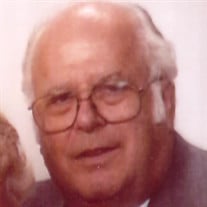 Duane E. Campbell, 85, of Wapakoneta, died 10:28 p.m., Wed. Jan. 3, 2018, at Wapakoneta Manor. He was born March 2, 1932, in Lima, the son of Terry T. & Marjorie Campbell, who preceded him in death. On Aug. 26, 1950, he married Marlene J. Sanner, and she survives. Other survivors include, 2 children, DaNeen (Michael) Bryan, Wapakoneta, Mitchell Campbell, Celina, OH, 5 grandchildren, Josh (Erin) Hemmert, Heather (Douglas) Deringer, John Paul Campbell, Sarah Campbell, & June Campbell, 7 great grandchildren, a brother, Winston Campbell, Marion, OH, several loving nieces & nephews. In addition to his parents, he was preceded in death by a brother, Ned Campbell, and a sister, Carolyn Adams. Duane worked as a designing engineer, attended the Cornell University School of Engineering, with a career that included managing the Brazilian operations of Stamco, New Bremen. He then moved on to the Ford Motor Co., Lima Engine Plant where he retired. Duane had a wide range of interests including owning and operating, with his wife Marlene, Hometown Antiques, Wapakoneta. Additionally, Duane was recognized nationally and internationally as a Master Builder of museum quality large scale model ships. He also designed, built, and piloted ¼ scale radio controlled vintage aircraft, all of which can be found on display in various museums across the country. He won many awards for his building and was a life-long founding member of the American Modelers Association. He was an associate member of the Wapakoneta V.F.W. Post #8445, and the Lily Lake Flying Club. Duane was devoted to his wife of 67 years, and enjoyed many wonderful years of retirement in Frostproof, FL. Private family services will be held at the Bayliff & Eley Funeral Home, Wapakoneta, with Pastor Josh Tissot officiating. Memorial contributions may be directed to St. Rita’s Hospice.

The family of Duane E. Campbell created this Life Tributes page to make it easy to share your memories.

Send flowers to the Campbell family.