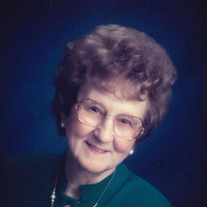 Eileen M. Reinhart, 99, passed away on September 27, 2020 at Otterbein Cridersville. She was born in St. Johns, Ohio on December 16, 1920 to Virgil and Leona (Decker) Jackson. Her siblings were Dale, Eldon and Neil Jackson and Nevelyn Knotts and Marjorie (Flinn) Gratz, all who have passed. She has two sons, Dennis of Cincinnati and Douglas (Trudie) of Wapakoneta. Eileen has two grandsons, Lucas (Cheryl) and Matthew (Allison) Reinhart, who reside in Columbus and a granddaughter, Shelly (Jim) Howard of Pennsylvania. Her great grandchildren include Hudson, Owen, Lucy and Leo Reinhart, and Gabe and Brady Howard. She was married for 65 years to Paul “Frankie” Reinhart who passed away in 2009. Eileen was a 1938 graduate of Blume High School in Wapakoneta and worked at Decker’s Dairy in Cridersville after school. She then worked at Westinghouse in Lima during WWII making electric motors. Eileen and Paul moved to the family farm just north of New Hampshire in 1949 and resided there for 60 years. Along with raising two sons, she assisted with tending the livestock, milking 15 cows, working ground before planting and hauling the harvest to the elevator. She was able to ride the combine during harvest until the age of 98. In 2009 she and Paul moved to their condo on the north side of Wapakoneta. She resided there until just 10 days before she passed. Eileen was well known for her culinary expertise. A family celebration always served her homemade noodles, a German chocolate cake, pies and chocolate chip cookies. For several years she had a business of making cakes, cookies for celebrations and weddings. She made the cake for Doug and Trudie’s wedding. She taught Sunday School for over 50 years at the New Hampshire Methodist Church and served as an election poll worker for a similar amount of time. She also volunteered to provide sandwiches and snacks at the railroad canteen in Lima for traveling military personnel in the 1950’s and 60’s. Her hobbies included reading/studying her Bible and solving the newspapers daily crypto quote (well past the age of 99). Upon moving to her condo she took up fishing in the nearby ponds and said she could stay there all day even though the bobber wasn’t moving. She attributed her longevity to her faith and a lifetime of hard work, especially on the farm. The family would like to especially thank New Vision Nursing and Home Care of Wapakoneta, St. Mary’s Joint Memorial Hospice, Marilyn, Joy and Jackie. Private family services will be held with Pastors Greg Wack & Jean Horn officiating. Burial will be in the Walnut Hill Cemtery, near New Hampshire, OH. Memorial contributions can be directed to the Waynesfield United Methodist Church or the Wapakoneta V.F.W. Post #8445. Arrangements are under the direction of the Waynesfield Chapel of the Eley Funeral Home & Crematory, Waynesfield, OH. Condolences may be expressed at www.eleyfuneralhomeandcreamtory.com.

Eileen M. Reinhart, 99, passed away on September 27, 2020 at Otterbein Cridersville. She was born in St. Johns, Ohio on December 16, 1920 to Virgil and Leona (Decker) Jackson. Her siblings were Dale, Eldon and Neil Jackson and Nevelyn Knotts... View Obituary & Service Information

The family of Eileen M. Reinhart created this Life Tributes page to make it easy to share your memories.

Send flowers to the Reinhart family.