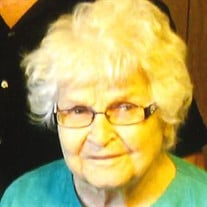 Evelyn J. King, 96, of Wapakoneta passed away peacefully on Friday, January 18, 2019 in her home. She was born October 29, 1922 in Shelby County to Henry and Erma (Koons) Arnold, who preceded her in death. She grew up on a farm west of Botkins and graduated from Botkins High School in 1940. Evelyn’s first job after graduation was manager at Vondie’s Gas Station and Restaurant. She met Harold King there after he returned from WWII and they were married March 4, 1946, he preceded her in death on August 4, 2002. They moved to Wapakoneta to work and raise a family. During her life Evelyn worked at the Teddy Bear Restaurant, the Hub Room at the Truck Stop and Meinerding’s. She was a cook and waitress earning the nickname “Cookie” Evelyn enjoyed growing roses, gardening, bird watching, playing euchre, and traveling around the country going to presidential libraries. She was a member of Saint Joseph Catholic Church and the VFW Post 8445 Auxiliary. Evelyn is survived by her children John (Lesley) King, Henderson, Nevada, Jerry King of Wapakoneta, and Jane (Randy) Dotto of Springfield, Ohio. She has two grandchildren Eric King and Kevin King both of Henderson, Nevada. Evelyn is survived by two sisters Audrey Joan Wehrle of Lancaster, Ohio and Rita Charles of Ann Arbor, Michigan. She has numerous nieces and nephews. She was preceded in death by sister Margaret (Pink) Nichols and brothers Norbert (Ruby) Arnold, Donald ((Libby) Arnold. In-laws Frank Wehrle, Alfred (Virginia) King, Donald King, Kelsey (Hilda) Geyer, Cletora (Eugene) Wahlers, Luetta (Burnell) Brauer and Tim Charles. Mass of Christian Burial will be 10:30 a.m., Fri. Jan. 25, 2019, at St. Joseph Catholic Church, Wapakoneta, with Rev. Jarred Kohn officiating. Burial will be in the Immaculate Conception Cemetery, Botkins. The family will receive family and friends 4-8 p.m. Thurs. Jan. 24, at the Eley Funeral Home & Crematory, 1102 Lincoln Ave. (St. Rt. 501) Wapakoneta. Memorial contributions may be directed to the St. Joseph Catholic Church Renovation Fund.

Evelyn J. King, 96, of Wapakoneta passed away peacefully on Friday, January 18, 2019 in her home. She was born October 29, 1922 in Shelby County to Henry and Erma (Koons) Arnold, who preceded her in death. She grew up on a farm west of Botkins... View Obituary & Service Information

The family of Evelyn Jane King created this Life Tributes page to make it easy to share your memories.

Evelyn J. King, 96, of Wapakoneta passed away peacefully on Friday,...

Send flowers to the King family.