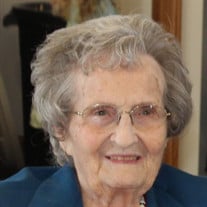 Evelyn Mae (Buchanan) Reinhart, 91, formerly of rural Botkins, went home to be with her Heavenly Father on Saturday, January 8, 2022 while residing at the Wapak Manor. She was born in Lima on October 25, 1930, the daughter of Cloyd L. and Helen R. (Burk) Buchanan who preceded her in death. She has a brother, James (Carol) Buchanan who survives her in Lexington, KY. Evelyn was a 1948 graduate of Jackson Center High School, as Valedictorian and went on to further her education at the Lima Memorial School of Nursing where she graduated with her Registered Nursing Degree in 1951. On October 27, 1951, she married her high-school sweet-heart, James D. Reinhart, who survives. They celebrated 70 years of marriage in 2021. They were the parents of four children: Deborah Reinhart (Stanley) Brown of St. Marys, Mary Rebecca (Becky) (Tom) Quellhorst of New Bremen, Janna Elizabeth (Erik) Hirschfeld of New Bremen, and David James (Dawn Fisher) Reinhart of Botkins, who all survive. Evelyn was Grandmother to nine: James (Kimberly Ray) Brown, Matthew (Jenny) Quellhorst, Sarah Quellhorst, Amanda (Ty) Edwards, Audrey (David) Ervin, Mitchell (Brittany) Hirschfeld, Clinton (Danielle) Hirschfeld, Victoria (Justin) Bruns, and Weston (Victoria) Hirschfeld. The family doesn’t stop there, as she was also Great Grandmother to twenty: Genevieve, Annaliese, William, and Lorelei Brown; Ariyah, Makena, and Cailyn Pfenning; Jaxon Edwards; Anne, Craig, Phillip, and Juliette Ervin; Petra and Charis Hirschfeld; Reagan, Benjamin, Grant, and Abigail Hirschfeld; Evelyn Grace and Noah Bruns; with three more on the way in 2022. Evelyn said many a time “To think, 70 years ago it was just the two of us.” She was very proud of her family and all the accomplishments that have been achieved by them. Evelyn was a homemaker and a true farmer’s wife. She was up before dawn every morning to get the cows milked before Jim left for work at the USPS. She finished the barn chores and then busied herself in the garden raising vegetables to last the year, sewing clothes for the family, and raking hay to be baled when Jim returned from work, just to name a few. She shared her talents with her children by teaching them how to sew, how to can fruits, and how to cook. She was a member of St. Mark Evangelical Lutheran Church, Clay Twp. where she was an active member of the Women’s Circle and promoted her children’s participation in the Junior and Youth Choirs, Junior Lutherans, and Luther League. Evelyn was also active in the Auglaize County Farm Bureau Women’s Committee for many years. In her later years, she was a member of the Auglaize County Extension Homemaker’s Club and was honored with the Homemaker of the Year award and also the Family Award. Evelyn and Jim enjoyed traveling and visited all 50 states together and even travelled to Germany for the Passion Play. Evelyn had a passion for reading and later working Word-Search puzzles. If she were asked how she was doing, her stand-by reply was “Pretty Good; I’m Pretty and I’m Good.” Oh, how she enjoyed the smiles that phrase would bring! Evelyn was preceded in death by a brother-in-law and his wife, Daniel and Patricia Reinhart. A service to celebrate Evelyn’s life will be held on Thursday, January 13, 2022 at 10:00am at St. Mark Lutheran Church, Clay Twp. with Reverend Cheryl Siegenthaler officiating. Interment will follow in the church cemetery. The family will receive friends and extended family at the Eley Funeral Home on SR 501 in Wapakoneta on Wednesday, January 12, 2022 from 2:00pm to 4:00pm and from 6:00pm to 8:00pm, as well as an hour prior to the service at the church on Thursday. Memorials can be directed to St. Mark Evangelical Lutheran Church, Clay Twp.

Evelyn Mae (Buchanan) Reinhart, 91, formerly of rural Botkins, went home to be with her Heavenly Father on Saturday, January 8, 2022 while residing at the Wapak Manor. She was born in Lima on October 25, 1930, the daughter of Cloyd L. and Helen... View Obituary & Service Information

The family of Evelyn Mae Reinhart created this Life Tributes page to make it easy to share your memories.

Send flowers to the Reinhart family.