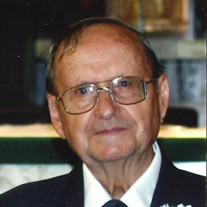 Gerald Wagner, 98, of Wapakoneta, passed away at 7 p.m., Nov. 12, 2020, surrounded by family at The Gardens of Wapakoneta. He was born April 9, 1922, in Jay Co., IN, the son of the late Fedalis and Hannah (Fisher) Wagner. On July 17, 1945, he married his sweetheart, Ann Reinhart, and she preceded him in death on March 22, 2020. His survivors include 6 children, Joy (Dick) Fishpaw, Wapakoneta; Roger Wagner, Columbus, OH; Robert Wagner, San Antonio, TX; June (Vernon) Litmer, Miamisburg, Ohio; Randy Wagner, Albuquerque, NM; & Joan (Jon) Weaver, Columbus, OH; 9 grandchildren, 13 great grandchildren, & 6 great great grandchildren. He was preceded in death by a sister, Rosetta Hake, and a brother, Walter Wagner. After completing the eighth grade, Gerald stayed home to help on the farm but soon began to home study about the mechanics and process of electrical wiring which was being introduced into rural Indiana. After partnering with his friend, Leroy, they began their careers at the age of 15 by wiring Gerald’s parents’ home and went on to do electrical work in homes around Bryant, Indiana. At 18, under the guidance and encouragement of his parents, Gerald joined the U.S. Army Air Corps. A year later, against the advice of his superiors, he tested out to enroll into the Air Force Cadets Pilot program at Pittsburgh University. Despite no high school or college education, he was the highest scorer of all 35 applicants. His first solo flight, in the middle of the night, from the mainland to an island and back was a total success and he was now a fighter pilot in W.W. II. Soon after that the war ended and he returned home and married Ann and started a family. During his lifetime, he and Ann built 4 homes, moving from Bryant, IN, to Coldwater, OH, to Celina, OH, and finally to Wapakoneta. He worked as an electrician at several companies, such as Hecklers Electric, New Idea Manufacturing, and Huffy Manufacturing. He was a partner in owning and operating the Mershman Manufacturing Co., and the Coldwater Machine Co. He also had his own business, Wagner TV & Electrical Service, while living near Coldwater, OH. Gerald was a dedicated Catholic man, and a hard working husband and father. He passed on an incredible work ethic that has been passed down through his children and grandchildren. He made several mission trips to third world Guyana with his daughter. He taught the men there the art and trades for building and maintaining the Georgetown Hospital while his daughter taught nursing. Gerald Wagner was a dreamer, idealist, visionary, and theorist. He marveled at how the Son of god, Jesus Christ, could rearrange His molecules and pass through the walls of the upper room to the apostles. He could converse fluently on the “big bang” theory and God’s role in it. He was amazed at the intricacies and complexities of the human body. Gerald and Ann could grow anything from sugar cane to 10 pound sweet potatoes and always had a flourishing garden. He had a passion for supporting the La Cross Missions, who reach out to the poor and underserved in the world. One of his last ideas was to build another home aside a railroad track where he could hear the trains coming. His dying wish was to find his lifelong sweetheart of 74 years and walk into the presence of God together. We love you Dad. We love you Mom. Private family Mass of Christian Burial will be at St. Joseph Catholic Church, with Rev. Jedidiah officiating. Military rites will be conducted by the Wapakoneta V.F.W. Post #8445 following the mass. Graveside services will follow at the Holy Trinity Church Cemetery, Bryant, Indiana. Arrangements are under the direction of the Eley Funeral Home & Crematory, where condolences may be expressed at www.eleyfuneralhomeandcrematory.com.

The family of Gerald Francis Wagner created this Life Tributes page to make it easy to share your memories.

Send flowers to the Wagner family.