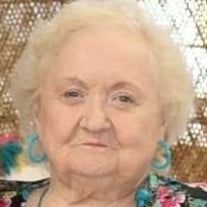 Geraldine (Gerri) Brown, aged 86, passed away on Sunday, June 13th, 2021 at 1:37 PM surrounded by her son, daughter, son in law, grandchildren, and great grandchildren. She was the widow of the late Berlyn T. Brown. The couple married in Piqua, Ohio, on January 15th, 1954, and celebrated 43 years of marriage together prior to his passing.  Geraldine was born on April 26th, 1935, to the late Harold and Lela Hunt of Tippecanoe, Ohio. She attended Piqua Central High School. Geraldine was a loving wife, mother, and homemaker and worked as an STNA at Auglaize Acres, where she spent the last four years of her life.  Geraldine was a woman of faith and devoted to God and her family. She enjoyed being with her loved ones and watching her grandchildren participate in extracurricular activities. She was also known to chauffeur her many grandchildren to appointments and sporting events, even though she did not have a driver’s license, which was not remedied until 1998. Geraldine was a fighter and champion of perseverance as she was a two-time cancer survivor and refused to allow the disease to conquer her. She will be remembered as a mother and grandmother to many, often extending her maternal bonds to those without mother figures in their lives. She was known to give advice, usually unsolicited, to those whom she loved. She was an avid Reese's Peanut Butter Cup lover and Diet Pepsi consumer; even requesting a truckful of Reese's Peanut Butter Cups being delivered as her final treat. Geraldine will also be remembered as being a handful for her loved ones; full of spunk and personality and always making her presence known to all. Geraldine is survived by her sister Dorthalee Nishwitz, daughter Leslie Miller (Gale) of Wapakoneta and son Tom Brown of Lima, grandchildren Brent Miller (Eiren), Aaron Miller (Katie), Meaghen Tidwell (Justin "JT"), Galen Miller (Tayla), Lexi Martin (Andrew), Alec Brown (Megan), and Colton Brown (Taylor), and 14 great grandchildren (Channing, Asher, Collins, Sloane, Mac, Milo, Piper, Presley, Carter, Crosby, Jace, Adley, Peyton, and Sadie). She was proceeded in death by her parents, beloved husband, sisters (Madeline Wright, Lucille Sando, Donnabelle Cavendar, and LeEtta Roemisch), brothers (Harold Victor Hunt, Dean Hunt, and Larry Hunt), sisters in law (Betty Collins and Rosie McPheron) and brothers in law (John Collins and Wesley McPheron). The memorial service will be held on Wednesday, June 16th, at 10:00AM at Eley Funeral Home in Wapakoneta with interment immediately following at Greenlawn Cemetery. Friends are called to visit on Tuesday, June 15th, from 4:00-8:00PM. In lieu of flowers, donations may be made to the Wapakoneta Kids Wrestling in care of Wapak Community Foundation or Mercy Health Hospice.

Geraldine (Gerri) Brown, aged 86, passed away on Sunday, June 13th, 2021 at 1:37 PM surrounded by her son, daughter, son in law, grandchildren, and great grandchildren. She was the widow of the late Berlyn T. Brown. The couple married in Piqua,... View Obituary & Service Information

The family of Geraldine "Gerri" Brown created this Life Tributes page to make it easy to share your memories.

Send flowers to the Brown family.