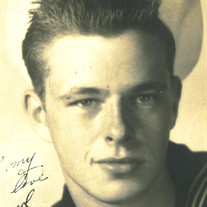 Howard D. Coy, 91, of New Hampshire, Ohio, departed this world at 11:03 a.m., Wed. May 22, 2019, at Lima Memorial Health System. He was born Sept. 21, 1927, near Richmond Dale, OH, the son of David Otto & Charity Ethel (Quincel) Coy, who preceded him in death. On July 24, 1954, he married Elizabeth R. “Betty” Mallory, and she survives. Other survivors include, 4 children, David (Renee) Coy, New Hampshire; Julie (Dan) Knowlton, Waynesfield; Cindy (Rod) Stauffer, Harrod; Jenny (Rod) Winegardner, Waynesfield; 19 grandchildren & 28 great grandchildren; a sister-in-law, Thelma Coy; and numerous nieces & nephews. In addition to his parents, he was preceded in death by 2 grandsons, Joshua Coy & Blake Knowlton; and his siblings, a twin brother, Harold, a brother, Quentin, and 2 sisters, Bernie Noe and Bonnie Carroll. Howard retired Feb. 1, 1991, as an electrician from the Ford Motor Co., Lima Engine Plant, after 28 years of service. A graduate of Belle Center High School, Howard enlisted in the U. S. Navy during W.W. II, and then served as an officer in the U. S. Army. He was a former member of the Lions Club and the American Legion. Howard was a very active and energetic fella, and had many adventures in his 91 years. At age 81, he rode a mule down the Grand Canyon, and was involved with VOSCH, taking eye glasses to impoverished parts of the world, including El Salvador and Hungary, just to name a few. Howard spent a lifetime of summers on Indian Lake boating, camping, and RV adventures across the country. Along with his wife, he enjoyed spending the last 30 years wintering in Florida. Most importantly, family always came first for he and Betty. Funeral services will be 2:00 p.m., Sunday, May 26, 2019, at the New Hampshire Church of the Nazarene, with Pastor Pam Spencer officiating. Following the funeral service, military rites will be conducted by the Wapakoneta V.F.W. Post #8445. The family will receive family and friends 2-6 p.m., Saturday, at the Eley Funeral Home & Crematory, 1102 Lincoln Ave., (St. Rt. 501), and 1 hour prior to the service, Sunday, at the church. Memorial contributions may be directed to the Waynesfield Youth Athletic Assn. Condolences may be expressed at www.eleyfuneralhomeandcrematory.com.

The family of Howard D. Coy created this Life Tributes page to make it easy to share your memories.

Send flowers to the Coy family.