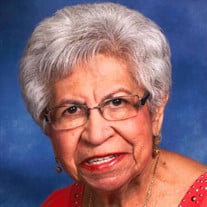 Mima Kiefer died at 7:20 PM on Dec 3, 2020 at the Wapak Manor. Mima was born Feb 5, 1928, in San Salvador, El Salvador C.A. She was the daughter of Jose S. and Josephina O. Morales who proceed her in death. She came to the United States in her teen years to learn English. She returned to El Salvador to work. It was there she met the love of her life Walter “Bud” Kiefer at a moon party and they married on December 20, 1953. They were together for 54 wonderful years. Walter “Bud” Kiefer proceeded her in death on Oct 6, 2008. She is survived by son William “Bill” (Sherry) Kiefer, daughter Anna Marie “Anita” Kiefer, grandchildren Hunter Jensen, Erin Jensen and Alexandra Kiefer and several nieces and nephews. After marrying Bud she became a US Citizen. She worked at the Daily News as a proofreader. She volunteered for many different organizations. She was a member of St. Joseph Catholic Church, Christian Mothers, VFW and the DAV, all of Wapakoneta. Mima did volunteer work for many years. Mima didn’t know a stranger and had many close friends. She and Bud loved spending time camping and playing cards with their card club. She also enjoyed traveling with her husband Bud and spending time with her children and grandchildren. She is proceeded in death by sisters, Aida “Nena” E. Taylor, Marina “Chickie” Melvin, brothers Mario Morales, Maurice Morales, Brothers-in-law Bailey “Tex” Taylor, William “Bill” Melvin, Dan W. Kiefer, Sister-in-law Jeri L. Kiefer. The family would like to thank the staff at the Wapak Manor for taking great care of Mom for the last two and a half years. Memorial contributions may be made to the DAV or Auglaize County Humane Society. Private family funeral mass will 10:30 a.m., Thurs. Dec. 10, 2020, at the St. Joseph Catholic Church, Wapakoneta, with Rev. Jedidiah Tritle officiating. Burial will follow in the St. Joseph Cemetery, Wapakoneta. The funeral service will be lived streamed on the funeral home Face Book page. Memorial contributions may be directed to the D.A.V., or the Auglaize Co. Humane Society. Arrangements are under the direction of the Eley funeral Home & Crematory, Wapakoneta, where condolences may be expressed at www.eleyfuneralhomeandcrematory.com.

Mima Kiefer died at 7:20 PM on Dec 3, 2020 at the Wapak Manor. Mima was born Feb 5, 1928, in San Salvador, El Salvador C.A. She was the daughter of Jose S. and Josephina O. Morales who proceed her in death. She came to the United States in... View Obituary & Service Information

The family of Irma J. "Mima" Kiefer created this Life Tributes page to make it easy to share your memories.

Send flowers to the Kiefer family.