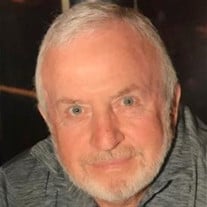 Jack L. Hindenlang, 79, of Wapakoneta, died unexpectedly from a heart attack Friday morning, November 29, 2019 in Dayton, Ohio. He was born September 6, 1940 in Spencerville, Ohio, the son of William and Ruth (Wade) Hindenlang, who preceded him in death. On November 25, 1961 he married Joan M. Wendel, who preceded him in death on June 24, 2018. Survivors include, three children, Lori L. Hindenlang, Lexington, KY; Scott M. (Lori) Hindenlang, Miamisburg, OH; and Peggy S. (Dave) Tally, Edgewood, KY; four grandchildren, Abbey and Jack Tally, and Mikaela and Mikenzie Hindenlang; three siblings Robert (Judy) Hindenlang, Terry (Karen) Hindenlang, both of Lima, Ohio, Mike (Kim) Hindenlang, Waynesfield, OH. Jack was a member of Saint Joseph Catholic Church, Wapakoneta and a graduate of the Wapakoneta High school class of 1958. He served in the US Marine Corps from 1958 to 1962 as a corporal in the motor pool stationed in Okinawa, Japan. He was a member of several service organizations including the VFW, AMVETS, Eagles, and the American Legion. Jack retired from Pepsi Cola Bottlers and then worked part time for T102 radio station, both in Lima. He enjoyed retirement and had started a “travel bucket list”. One of his favorite things to do was hunt in southern Ohio with the ‘Farm Boys’. “He was known by many as a very happy and good-natured man, and went out of his way to talk to everyone, even strangers. He was deeply loved by his children and grandchildren and all will miss him terribly. God bless you Pops, we love you!” Mass of Christian Burial will be 10:30 a.m., Thurs. Dec. 5, 2019, at the St. Joseph Catholic Church, with Rev. Jared Kohn officiating. Military rites will be conducted by the Wapakoneta V.F.W. Post #8445, at the church following mass. The family will receive family & friends 6-8 p.m., Wed. & 9-10 a.m., Thurs. at the Eley Funeral Home & Crematory, 1102 Lincoln Ave. (St. Rt. 501) Wapakoneta. Memorial contributions may be directed to the Auglaize Co. Humane Society. Condolences may be expressed at www.eleyfuneralhomeandcrematory.com.

The family of Jack Hindenlang created this Life Tributes page to make it easy to share your memories.

Send flowers to the Hindenlang family.