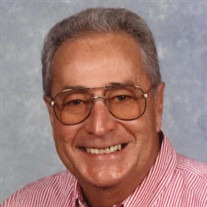 James William “Bill” Conley, 87, of Lima died 9:10 a.m., Fri. Feb. 12, 2021, at Grande Lake Healthcare Center, St. Marys, OH. He was born March 21, 1933, in Lima, the son of James W. & Lucille (Nichols) Conley who preceded him in death. He was previously married to Dorothy (Weaver) Conley, and she is deceased. Survivors include, 2 daughters, Candace Frederick, Wapakoneta, Cathy (Troy) Freytag, Lima, 8 grandchildren, 13 great grandchildren, & 10 ½ great great grandchildren. He was preceded in death by a sister, Mabel Fultz. Bill served in the U.S. Army from 1953-1955 during the Korean War in Kumwan, north of the 38th parallel. He worked as a surveyor with Kohli & Kaliher Associates, Lima, for over 50 years. Bill was a member of the V.F.W., American Legion, and the Eagles, all of Lima. He enjoyed fishing, hunting, and motorcycling. In accordance with Bill’s wishes, there is to be no services. Arrangements are under the direction of the Eley Funeral Home & Crematory, Wapakoneta, where condolences may be expressed at www.eleyfuneralhomeandcrematory.com. Memorial contributions may be directed to the Alzheimer’s Foundation.

The family of James William "Bill" Conley created this Life Tributes page to make it easy to share your memories.

Send flowers to the Conley family.