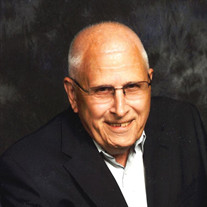 James (Jim) M. Knoch, 89, of Wapakoneta, OH, died at 3:40 p.m., Mon. Nov. 9, 2020, at the Mercy Health – St. Rita’s Medical Center, Lima, OH. He was born Mar. 9, 1931, in Lakeview, Logan County, OH, the son of Earl V. “John” & Ada L. (Harrod) Knoch, who preceded him in death. On Aug. 18, 1956, he married Carol A. (Christler) Knoch, and she died Sept. 8, 2013. Survivors include, 2 sons, James M. (Karen) Knoch, Flower Mound, TX, Eric S. (Beth) Knoch, Loveland, OH, 2 grandchildren, Holly and Whittney, 2 step grandchildren, Adam and Megan, a great grandson, Emerson, several nieces and nephews. He was preceded in death by a step-sister, Mary Reigelsperger and a step-brother, Don Harrod. Jim served in the U.S. Army during the Korean War. He began his career in law enforcement with the Auglaize Co. Sheriff’s Office as a deputy for 5 years. He then was elected Auglaize Co. Sheriff for 6 terms and served in that capacity for 24 years. He later worked at Crown Equipment, New Bremen. Jim was a member of St. Mark’s Lutheran Church, Wapakoneta and a 1949 graduate of Blume High School. He enjoyed spending time with his family, attending Wapakoneta Redskins sporting events, and was an active member of the American Legion, Post #330, and Wapakoneta V.F.W. Post #8445, both of Wapakoneta. Private family services will be held at the Eley Funeral Home & Crematory, St. Rt. 501, Wapakoneta, with Pastor Mark Bauer officiating. Burial will be in the Greenlawn Cemetery, Wapakoneta, where military rites will be conducted by the Wapakoneta V.F.W. Post #8445. In lieu of flowers, memorial contributions may be directed to the James Knoch Memorial Fund, through Minster Bank, Wapakoneta. Condolences may be expressed at www.eleyfuneralhomeandcrematroy.com. The service will be live streamed on the Eley Funeral Home & Crematory Facebook page.

The family of James M. Knoch created this Life Tributes page to make it easy to share your memories.

Send flowers to the Knoch family.