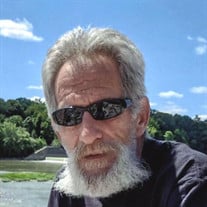 James Hudson “Jim” Thomas, II, 67, of rural Wapakoneta, died 8:05 a.m., Thurs. June 11, 2020, at his home with his wife, son, and dog at his side. He was born Aug. 26, 1952, in La Jolla, CA, the son of James Hudson & Barbara Jane (Hathaway) Thomas, who preceded him in death. On Sept. 18, 1993, he married Pamela K. Kohler, and she survives. Other survivors include, a son, James Hudson “Jimmy” Thomas, III, & McKenzie Smith, Wapakoneta, a sister, Jamie (Dan) Hutto, Huntington Beach, CA, father-in-law & mother-in-law, Joe & Mary Kohler, 3 nieces & 7 nephews, sisters-in-law & brothers-in-law, Sue Markely, Marge (Brian) Cook, & Tom (Carla) Kohler, and his dog, Rascal. In addition to his parents, Jim was preceded in death by a sister, Kathleen Thomas, and a niece, Starla Thomas. Jim was a cement mason and a member of Cement Masons Union Local #886, Toledo. He was a U.S. Army veteran and served in the Vietnam War. Jim’s hobbies included riding his Harley, swimming, golfing, boating, and working outdoors. His favorite vacation spot was Gatlinburg, TN, where he and Pam were married. Jim was an avid drag racing enthusiast and fan of the San Francisco 49ers. He enjoyed spending time with his family and friends and in his younger years, he enjoyed canoeing with his son, Jimmy. A private family service will be held at a later date. There is to be no public visitation. Memorial contributions may be directed to the Cancer Association of Auglaize Co. Arrangements are under the direction of the Eley Funeral Home & Crematory, Wapakoneta. Condolences may be expressed at www.eleyfuneralhomeandcrematory.com.

The family of James Hudson Thomas II created this Life Tributes page to make it easy to share your memories.

Send flowers to the Thomas family.