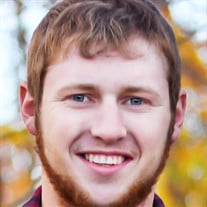 Jeremy Robert Riemesch, 19, of Waynesfield died Saturday morning, May 15, 2021 in Auglaize County from injuries sustained in a single vehicle accident.  Jeremy was born in Lima, Ohio, on August 10, 2001. He graduated from Waynesfield-Goshen High School and Apollo Career Center in May 2020, where he obtained his CDL license. Upon graduation, Jeremy joined Frederick Harvesting in Alden, KS, where he lived out his dream being part of the Great American Harvest 2020. Jeremy and the Frederick crew harvested grain from Oklahoma to North Dakota, where the friends he made became like brothers. He returned home in November of 2020 to continue work at Pinecrest Farms. Jeremy was also a member of the New Hampshire Community Church and the W-G FFA where he earned his State and American Degrees. Farming and trucking were his passions and his love for John Deere, Ford and Peterbilt ran deep. He will be remembered for his smile, goofy personality and incredible work ethic.  Jeremy is survived by his father and mother, Mark and Sandy (Barnhouse) Riemesch and his sisters, Jessica (Eric) Allen of Angola, Indiana, and Jenna Riemesch (Josh Klein) of Waynesfield; grandparents, Jerry and Peggy (Bibler) Barnhouse of Elida and Don and Cheryl (Prine) Tullock of St. Cloud, Florida; cousin, Doug (Becky) Rosenbauer; aunts, Candy (Mitch) Morse, Donna (Andy) Cook, Karen Johnson, and Linda Sheckler. Jeremy is also survived by Greg and Tami Shobe and their family, who through working at Pinecrest Farms became his second family. He was preceded in death by his Great-Aunt Rose Riemesch.  Visitation will be held Friday, May 21, 2021, from 2-8 p.m. at the Eley Funeral Home in Waynesfield. A funeral service officiated by Pastor Jon Horn will be held Saturday, May 22, 2021, at 11:00 a.m., with visitation beginning at 10:00 a.m., at the New Hampshire Community Church. Burial will follow at Walnut Hill Cemetery.  Memorial contributions may be directed to the Waynesfield-Goshen FFA at 500 N. Westminster St., Waynesfield, OH 45896 and/or Children’s Medical Missions West at 15595 Waynesfield Rd., Waynesfield, OH 45896. Condolences may be expressed at www.eleyfuneralhomeandcrematory.com.

Jeremy Robert Riemesch, 19, of Waynesfield died Saturday morning, May 15, 2021 in Auglaize County from injuries sustained in a single vehicle accident.  Jeremy was born in Lima, Ohio, on August 10, 2001. He graduated from Waynesfield-Goshen... View Obituary & Service Information

The family of Jeremy R. Riemesch created this Life Tributes page to make it easy to share your memories.

Send flowers to the Riemesch family.