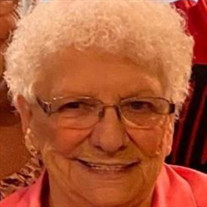 Jessie Vonda Lee Beech, 86, of Wapakoneta, died 12:01 a.m., Mon. March 28, 2022, at Mercy Health - St. Rita’s Medical Center, Lima. She was born Nov. 26, 1935, in Lima, the daughter of the late Orval M. & Eva M. (Neal) Ambler. On Sept. 6, 1952, she married Charles W. Beech, and he preceded her in death on Sept. 18, 1992. Survivors include 3 children, Michael W. (Johnnie) Beech, Jerry C. (Mary) Beech, and Elizabeth E. “Libby” (Russell) White, all of Wapakoneta, 6 grandchildren, 12 great grandchildren, and several nieces and a nephew who remained close to her. In addition to her parents and her husband, she was preceded in death by her brothers, William, Curtis, and John (Jack) Ambler, and her sister, Barbara Kowell. Jessie was a homemaker and a talented seamstress. In her earlier years, she had worked at Grandview Dry Cleaners and the Sundial Motel, both of Wapakoneta, and DePalma’s Restaurant, Lima. She was one of the Ohio State Buckeyes and Dallas Cowboys biggest fans, very rarely missing a game. She also enjoyed an occasional road trip, playing cards, bingo, bowling, reading, quilting, and crocheting, but mostly enjoyed the time spent with members of her family. A private Celebration of Life will be held at the Memorial Park Cemetery, Lima at a later date. Arrangements are under the direction of the Eley Funeral Home & Crematory, Wapakoneta, where condolences may be expressed at www.eleyfuneralhomeandcrematory.com. Memorial contributions may be directed to the Cancer Association of Auglaize County, the family, or a charity of the donor’s choice. Jessie will be dearly missed by all who knew and loved her.

The family of Jessie Vonda Lee Beech created this Life Tributes page to make it easy to share your memories.

Send flowers to the Beech family.