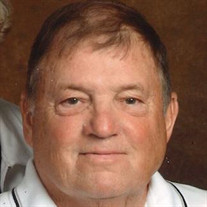 John C. Johnson, 82, of rural Wapakoneta, died 3:39 a.m., Sun. Oct. 10, 2021, at his home with his family at his side. He was born Sept. 18, 1939, in Toledo, OH, the son of the late Carl E. & Maxine (Betts) Johnson. On Sept. 7, 1963, he married Dianna S. King, and she preceded him in death on Nov. 21, 2020. Survivors include, 2 children, Greg (Mindy) Johnson, Wapakoneta, Tricia White, Wapakoneta; 5 grandchildren; 4 great grandchildren; a brother, James (Vivienne) Johnson, Brisbane, Australia, a sister, Carol (Jon-dec) Klaus, Old Zionsville, PA, a brother-in-law, Ron (Carol) King, Atlanta, GA, a sister-in-law, Elaine (Terry) Nichols, Columbus, OH. John was an easygoing guy and always kept a positive outlook. His sense of humor and laid back personality earned him many friends throughout his lifetime. It was unusual to go anywhere with him where he did not meet up with an old friend, or leave with newfound ones. In his early career he worked as a barber, operating his own shop in downtown Wapakoneta. He went on to start his own business as an independent contractor in the early 1980s and continued to work up until this year. When he wasn’t busy working, he loved being outdoors, tending his farm and bow hunting. He was happiest sitting in a tree stand in the middle of the woods with his bow, waiting to spot the ‘big one’. He was a skilled archer and excellent marksman and won many awards and trophies competing in archery competitions. In his earlier years, he enjoyed playing amateur softball and played for several teams and even sponsored teams of his own. If you found him indoors, it was usually to catch a baseball game or watch college football. He never missed rooting for the Buckeyes. He is loved by so many and we will miss him more than he will ever know. We take some measure of comfort knowing his long, hard struggle is over and he is finally united with his beloved wife whom he so desperately missed, and pray they are both at peace in the presence of God. Funeral services will be 1 p.m., Thursday, October 14, 2021, at the Eley Funeral Home & Crematory, St. Rt. 501, Wapakoneta, with Pastor Doug Pretorius officiating. Burial is to follow in the Resthaven Memory Gardens, near Moulton, OH. The family will receive family and friends from 11 a.m. until time of the service, Thursday, at the funeral home. Memorial contributions made be made to American Cancer Society. Condolences may be expressed at www.eleyfuneralhomeandcrematory.com.

The family of John C. Johnson created this Life Tributes page to make it easy to share your memories.

Send flowers to the Johnson family.