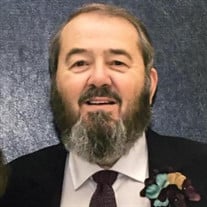 Rev. John E. Rumple, 67, of Wapakoneta, was received into the waiting arms of His Savior Jesus Christ on Saturday, October 28, 2017 at St. Rita’s Hospital following a brief illness. He was born June 5, 1950, in Celina, Ohio, the son of Harvey (Ed) and Ada Jane (Hook) Rumple who preceded him in death. He married his high school sweetheart, Dorothy L. Robinson, on June 7, 1969 and she survives. He was a very passionate man and dearly loved his wife and family. He is survived by three sons and one daughter: Jay (Robin Marihugh) Rumple, Sevierville, Tenn., Tony (Jen Lubina) Rumple, Virginia Beach, Va., Scott (Katie Jackson) Rumple, Coleman, Fla, and Staci (Daryl) Bernath, Bryan, Oh. He is also survived by 11 grandchildren: Kyle Rumple, Jonathan Rumple, Christopher Rumple, Elle Rumple, Téa Rumple, Katherine Rumple, Broston Bernath, Benjamin Rumple, Aven Bernath, and twins Callan and Reece Bernath. John is also survived by 2 sisters Jane (Dale) Heyd and Jacki (Paul) Hazelton and 4 brothers James Rumple, Joe (Brenda) Rumple, Jeff (Kris) Rumple and Mike (Melissa) Pursell. John grew up in Rockford, Ohio but later graduated from Wapakoneta High School in 1968. He worked for Ford Motor Company in Lima for 30 years. In 1994, John felt the call to preach the gospel. Following his retirement from Ford in 1998, he was appointed as senior pastor at the Montpelier (Ohio) First Church of the Nazarene. John pastored this church for 17 years until retiring in 2015. It was in Montpelier where he started a “Little Red Stone” ministry to share Christ in a practical way. Ministry was his passion. He was a lifetime member of the Church of the Nazarene. He led many Bible schools throughout the area with his gospel illusions and puppet ministry. The Sonshine Puppeteers involved his own children, as well as other children from the church. He served as preteen camp director at the Lighthouse Camp & Conference Center in St. Marys for 6-7 years which he thoroughly enjoyed. He was also very involved in the Fellowship of Christian Magicians and served as the FCM Regional director for 10 years. He was a member of the Pioneer Lions Club and Christian Motorcyclists Association, serving as CMA chaplain for a few years. John was an avid golfer and enjoyed woodworking with his wife beside him. He was a big fan of THE Ohio State Buckeyes, and the Wapakoneta Redskins, his alma mater, often attending their basketball and football games. Visitation for family and friends will be at the Bayliff & Eley Funeral Home, Wapakoneta, on Tues., Nov. 7, from 4-8 PM. A celebration of John’s life will be held at the Wapakoneta Church of the Nazarene on Nov. 8 at 10:30 AM with Dr. Geoff Kunselman officiating. There will be one hour of viewing preceding the service. Burial is to follow the service at Resthaven Memorial Gardens in St. Marys. Suggestions for memorial contributions may be directed to Lighthouse Camp & Conference Center (specifically for children’s camp scholarships), Montpelier First COTN or Wapakoneta COTN for their youth programs.

Rev. John E. Rumple, 67, of Wapakoneta, was received into the waiting arms of His Savior Jesus Christ on Saturday, October 28, 2017 at St. Rita&#8217;s Hospital following a brief illness. He was born June 5, 1950, in Celina, Ohio, the son of... View Obituary & Service Information

The family of Rev. John E. Rumple created this Life Tributes page to make it easy to share your memories.

Send flowers to the Rumple family.