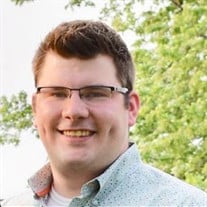 Jordan E. Fledderjohann, 26, of Botkins, died 7:58 p.m., Wed. Sept. 11, 2019, at the Mercer County Community Hospital, Coldwater, OH, from injuries sustained in an auto accident in Mercer Co. He was born June 1, 1993, in Lima, OH, the son of Clark M. & Kathy A. (McGeorge) Fledderjohann, who survive in Botkins. Other survivors include, 2 sisters, Kendra Fledderjohann, Wapakoneta, Sara (Brian) Skinner, Anna, OH 4 nephews, Braxton, Weston, Ian, & Levi his significant other, Brooklyn Young, grandparents, Myron & Beverly Fledderjohann, New Knoxville, OH, and several aunts, uncles and cousins. He was preceded in death by grandparents, Kenneth & Patricia McGeorge, and an uncle, John McGeorge. A 2012 graduate of Botkins High School, Jordan attended the Lake Land College, Mattoon, IL, where he was a member of the livestock judging team. He then transferred and graduated from The Ohio State University, where he was a member of the Alpha Gamma Sigma Fraternity. Jordan worked as a crop insurance specialist with Farm Credit Mid-America. He was also co-owner of the Fledderjohann Show Goats. He showed goats throughout the United States, and served as a livestock judge. Jordan was an avid Buckeyes fan, and enjoyed deer hunting. He also enjoyed having an adult beverage with his family and friends. Funeral services will be 10:30 a.m., Mon. Sept. 16, 2019, at the Eley Funeral Home & Crematory, 1102 Lincoln Ave. (St. Rt. 501), Wapakoneta, with Rev. Sean Wilson officiating. The family will receive friends from 2-8 p.m., Sun. and 1 hr. prior to the service on Mon., at the funeral home. Memorial contributions may be directed to the Jordan Fledderjohann Memorial Scholarship Fund. Condolences may be expressed at www.eleyfuneralhomeandcrematory.com.

The family of Jordan E. Fledderjohann created this Life Tributes page to make it easy to share your memories.

Send flowers to the Fledderjohann family.