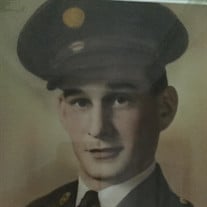 Joseph Andrew Dolosich, age 97 passed away with his family by his side on March 31, 2018 at 1:40 a.m. at Otterbein Assisted Living in Cridersville, OH. Joseph was born on March 1, 1921 in West Winfield, Pennsylvania to the late Anna Shebert and Joseph Dolosich. Joseph was the loving husband of three wives whom he adored - Rose Dolosich, Tabitha Dolosich and Betty Dolosich and a sister Margaret (Homer) Walters who all preceded him in death. He was a U.S. Army Veteran serving from May 27, 1940 until August 4, 1945. He received his training at Ft. Benning then joined the 503rd Airborne PRCT to serve as a paratrooper in the Pacific Theatre. He faced combat in New Guinea, Noemfoor, Mindoro and Corregidor. Among his many awards were two bronze medals for heroic achievement, the Presidential Metal of Honor and a Presidential Unit Citation. He proudly wore his WWII hat and beamed when people thanked him for his service. Joe enjoyed being with his family, dancing, and exercising at the YMCA. He was a stationary engineer with The Cleveland Municipal Water Department. Upon retirement, he moved to Las Vegas and worked for Friendly Ford. While living in Las Vegas, Joe and his good friend Gib spent many years raising money for the Shriners Hospitals for Children by recycling aluminum cans. They visited schools and encouraged students to recycle and save cans for the project and stopped at construction sites where they provided containers for workers to deposit their cans. While living in Las Vegas, Joe was an active member of the Masons, Shriners, Legion of Honor and Eastern Star. He moved to Wapakoneta at age 90 and was a member of the VFW Post 8445 and Hammer Lodge #0167. Joseph is survived by a son James Dolosich, daughter Marlene (Daniel) Graf and brother Leonard (JoAnn) Shebert. He was extremely proud of his grandchildren, Christi (Ben) Malbasa, Kenneth Graf, Dylan Dolosich and Daniel Dolosich. His four great grandchildren Madeline, Thomas, Andrew and Lauren Malbasa brought him great joy and always made him smile. A celebration of Joe’s life will be held on 11:00 a.m. Wed. April 4, 2018, at Bayliff & Eley Funeral Home in Wapakoneta. The family will receive friends from 10:30 -11:00 at the funeral home. A graveside memorial will follow at Greenlawn Cemetery in Wapakoneta. Military rites will be conducted by Wapakoneta VFW Post 8445 and Masonic Services by Hamer Lodge #167. In lieu of flowers, memorial contributions may be made to Shriners Hospitals for Children.

Joseph Andrew Dolosich, age 97 passed away with his family by his side on March 31, 2018 at 1:40 a.m. at Otterbein Assisted Living in Cridersville, OH. Joseph was born on March 1, 1921 in West Winfield, Pennsylvania to the late Anna Shebert... View Obituary & Service Information

The family of Joseph Andrew Dolosich created this Life Tributes page to make it easy to share your memories.

Joseph Andrew Dolosich, age 97 passed away with his family by...

Send flowers to the Dolosich family.