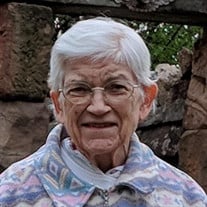 Karlene E. Speicher, 88, of Wapakoneta and formerly of Celina, passed away Tuesday, May 18, 2021, at 4:55 p.m. at Wapakoneta Manor Nursing Home. She was born Aug. 30, 1932, in West Alexandria, Ohio, the daughter of the late Karl and Eva (Roach) Pickering. She is survived by her daughter, Melanie Speicher, of Wapakoneta, two grandchildren, Heather and James Nye, of Findlay, and their children, Jaxon, Thorton and Payson, and Shane and Aleshia Speicher, of New Windsor, New York, and their children, Jaden, Carson, Bryson and Dalton; and one sister-in-law, Jane Pickering, of St. Marys. She was preceded in death by six brothers and sisters and their spouses, Francis and Evelyn Pickering, Joe and Joan Pickering, Hazel and Bob Heinfeld, Ralph Pickering Sr., Anita and Tom Andrew and Bob and Pat Pickering. Mrs. Speicher retired from Huffy Bicycle Corp, in Celina. She as a member of the Methodist faith. Her joy in life was being around her grandchildren and great-grandchildren. Graveside services will be held at a later date. The family would like to thank the staff of Wapakoneta Manor Nursing Home for the care they gave their mom, grandma and great-grandma. Arrangements are under the direction of Eley Funeral Home and Crematory, Wapakoneta.

The family of Karlene E. Speicher created this Life Tributes page to make it easy to share your memories.

Karlene E. Speicher, 88, of Wapakoneta and formerly of Celina,...

Send flowers to the Speicher family.