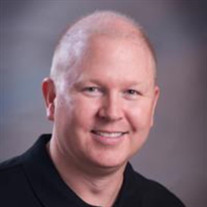 Dr. Kenneth J. Jackson, 50, died at 4:10 p.m. on June 22, 2021, at the Lima Memorial Health System with his family by his side. He was born April 11, 1971, in Lima, OH, to John (Susan) Jackson and Pamela (Tom) Fairburn, who survive in Lima. He was previously married to Kendra Jones Jackson. Ken graduated from Lima Senior High School in 1989. He received a B.S. in biology from the University of Cincinnati and Doctor of Dental Surgery from The Ohio State University in 1998. He has been in private practice in Wapakoneta, OH, since 1998. Ken was a member of NW Dental Association, Ohio Dental Association, American Dental Association, and a member of Shawnee Country Club. Survivors include his children, Alaina and Evan, at home; brother Myke (Kim) Jackson, of Morrow, OH; Uncle Jeff (Peggy) Jackson, of Lima; stepbrothers, Ken (Andrea) Fairburn, of Lima, Scott (Deb) Fairburn, of Lima, Matt (Jill) Fairburn, of Huber Heights; several cousins and many great friends. He is preceded in death by his grandparents Wayne and Lena “Susie” Hawley and Harry and Gladys Jackson. Ken was a great skier and shared his passion with his children from an early age at his favorite ski resort, Deer Valley. He also enjoyed golfing, grilling, and traveling with friends. He was a great storyteller and had a witty sense of humor that will be missed by all. The family will receive friends Thursday July 8, 2021, from 2-8 p.m., at the Eley Funeral Home & Crematory, St. Rt. 501, Wapakoneta. Memorial services will be held 10:30 a.m., Friday July 9, 2021, at the funeral home. Memorial contributions may be given in his honor to the Wapakoneta Community Foundation or St. Jude’s Children Research Hospital. Condolences may be expressed at www.eleyfuneralhomeandcrematory.com.

The family of Kenneth J. Jackson created this Life Tributes page to make it easy to share your memories.

Send flowers to the Jackson family.