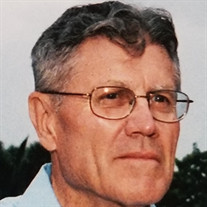 Lester L. Wildermuth, 88, of rural Jackson Center, OH, left this world at 2:50 a.m., Sun. Dec. 2, 2018, while under the care of the Cridersville Healthcare Center. He was born March 12, 1930, in Shelby Co., the son of Albert & Cora (Schuler) Wildermuth who preceded him in death. On May 2, 1964, he married Joyce E. Swartz, and she survives. Other survivors include, a daughter & son-in-law, Renée and Gessell Nunez, Jackson Center; a brother, Herman (Gerry) Wildermuth, Wapakoneta; a nephew, Michael Wildermuth, Jackson Center; and a niece, Sherri (Bruce) Burkard, MI. Lester was a graduate of Jackson Center High School. He retired in 2007 from the cuttergrind department of the Ford Motor Co. Lima Engine Plant, after 50 years of service. He was also a self-employed farmer. Lester devoted much of his time working to provide for his family. He also enjoyed spending spare moments with his family and friends and attending area auctions. Funeral services will be 10:30 a.m., Thurs. Dec. 6, 2018, at the Eley Funeral Home & Crematory, 1102 Lincoln Ave., (St. Rt. 501) Wapakoneta, with Pastor Ed Shady officiating. Burial is to follow in the Glen Cemetery, Port Jefferson, OH. The family will receive family and friends 4-7 p.m., Wed. Dec. 5, and 1 hr. prior to the service, Thurs. at the funeral home. Memorial contributions may be directed to the Miami Valley Alzheimer’s Association, the Voice of the Martyrs, or Samaritan’s Purse.

The family of Lester L. Wildermuth created this Life Tributes page to make it easy to share your memories.

Send flowers to the Wildermuth family.