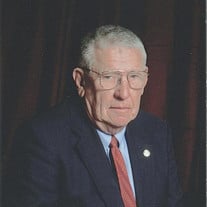 Louis J. Meyer, 87, of Wapakoneta, died Wed. morning, Sept. 16, 2021, at his home with his family at his side. He was born April 5, 1934, in Edgerton, OH, the son of the late Walter and Doris (Lehman) Meyer. On Dec. 28, 1957, he married Sharon Anne Keener and she survives. Other survivors include, 2 children, Craig Meyer, Delaware, OH, Pam (Dean) Hobler, Wapakoneta; 2 granddaughters, Erin (Jason) Wenning and their children, Haydon & Braydon, Emily (Josh Zaccagnino) Borsh and their daughter Riley; several nieces & nephews. He was preceded in death by 2 sisters, Janet Welly and Beverly Staysniak. Lou was a graduate of Edgerton High School, Miami University, and the Bowling Green State University. He was a U.S. Army veteran stationed in Germany. He began his teaching and coaching careers in Parma, OH, and continued at Defiance, Columbus Grove, Kalida, retiring Dec. 31, 1992 from the Wapakoneta City Schools. Lou enjoyed woodworking, spending winters in Florida, telling his many stories, and hanging out at the shop. He was an avid golfer and enjoyed traveling. Lou was very proud of his granddaughters and great grandchildren. He was a member of First English Lutheran Church, Wapakoneta. His other memberships included the Wapakoneta V.F.W. Post #8445, the American Legion Post #330, and the Hamer Lodge #167, F. & A.M. He was also a former member of the Wapakoneta Country Club. Funeral services will be 11:00 a.m., Wed. Sept. 22, 2021, at the First English Lutheran Church, Wapakoneta, with Pastors Steven Nelson and Neil Brady officiating. Burial will be at a later date in the Forest Lawn Cemetery, Hicksville, OH. The family will receive family and friends 4-7 p.m., Tues. at the Eley Funeral Home & Crematory, St. Rt. 501, Wapakoneta, and 1 hr. prior to the service, Wed. at the church. Military rites will be conducted by the Wapakoneta V.F.W. following the funeral service at the church. Memorial contributions may be directed to the Animal Resource Foundation, c/o Mile Creek Animal Hospital, 4625 St. Rt. 66, Minster, OH, 45865, or the First English Lutheran Church. Condolences may be directed to the eleyfuneralhomeandcrematroy.com.

The family of Louis J. Meyer created this Life Tributes page to make it easy to share your memories.

Send flowers to the Meyer family.