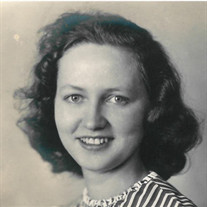 Marie Barclay Allen, 95, of Wapakoneta, passed away peacefully in her sleep, Nov. 18, 2017, at Vancrest of St. Marys, where she received kind and compassionate care from the staff and Grand Lake Hospice. She was taken there from St. Rita’s Medical Center, Lima, following surgery to repair a broken hip after falling. Marie was born Dec. 14, 1921, in Napoleon, OH, the daughter of Herman & Essie (Parker) Barclay. She was married to Woodrow D. Allen, who preceded her in death in 2008. Survivors include her son, Woodrow Dale Allen, Jr., Wapakoneta, and her grandchildren, Margot Allen (Michael) Repas, Gretchen Allen (Peter) Bauman, and Molly Allen (Richard) Cissell. Also surviving are great grandchildren, Emily Briley Bauman, and Lincoln Thomas Cissell, and her daughters-in-law, Marie Shovlin Allen and Mary Petrie Allen-Ramsey. Marie was preceded in death by her parents, and her siblings and their spouses, Woodrow (Martha) Barclay, Edith Barclay (Don) Schoonover, Lucille Barclay (Carl) Montgomery, and George (Ginny) Barclay, and her nephews, Craig Montgomery & Darwin Schoonover. There are surviving nieces and nephews who will remember her as their kind, warm, and friendly “Aunt Marie” with a beautician’s penchant for small talk and easy laughter. She had daily appointments with her “friends”, some for nearly 60 years. She was a great listener and confidant and all looked better when they left than when they arrived. Marie was a 1940 graduate of Lima Central High School, and a 1941 graduate of Frederick’s Beauty Academy. She took advanced hair styling classes from Leon Amondola in New York City and from Vidal Sassoon in San Francisco. During W.W. II, Marie trained at St. Rita’s Hospital and became a nurse’s aide. She also volunteered at the servicemen’s canteen at the Pennsylvania train station in Lima. She was a member of the Daughters of the American Revolution. Marie was the manager and owner of the Princess Beauty Shop and also worked at the “The Clip Joint” prior to her retirement after 61 years as a beautician. At the age of 50, Marie got her pilot’s license and was one of a few female pilots in Ohio to receive as instrument rating. As a new pilot, Marie joined the Civil Air Patrol, the Lima Flying Club, the Sky Rovers, and the “99’s”, the Lady’s International Flying Club. Marie was also a member of the original Lima Sports Car Club, and while driving a Jaguar XK 120, earned a “Driver of the Year” award. When on the road or in the sky, Marie found joy and freedom and the warm friendships of others who shared interests. She was a voracious reader with diverse interests in histories, biographies, science, and novels of adventure, romance, and mysteries, from Dickens to Twain to Grisham To Evanovich. She always had a book in her car in case an unexpected time to read were to occur. Throughout her life, she always watched TV while knitting. In her retirement years, she knitted lap blankets for local nursing home patients and quickly started another one after one was delivered. Marie enjoyed playing bridge with her many ladies bridge clubs for over 60 years. Many were her lifelong friends and beauty shop customers as well. There will be no be no public funeral services. Marie’s burial will be a private intimate ceremony with her family. Arrangements are being conducted by the Bayliff & Eley Funeral Home, Wapakoneta, where condolences may be expressed at www.bayliffandeleyfh.com. Memorial contributions may be directed to the Grand Lake Hospice.

Marie Barclay Allen, 95, of Wapakoneta, passed away peacefully in her sleep, Nov. 18, 2017, at Vancrest of St. Marys, where she received kind and compassionate care from the staff and Grand Lake Hospice. She was taken there from St. Rita&#8217;s... View Obituary & Service Information

The family of Marie Barclay Allen created this Life Tributes page to make it easy to share your memories.

Send flowers to the Allen family.