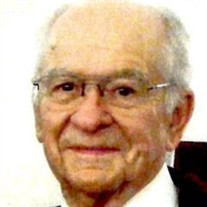 Marion H. Miller, 94, was called to his heavenly home early Sunday morning, November 21, 2021. His failing body is now made perfect, and he is with his Lord and Savior, Jesus Christ. The youngest of six children, he was born December 17, 1926, the son of Henry and Mary Miller, on the family farm in Elida, Ohio. He lived in Lima most of his life until moving to Grove City in 2017. He pursued his passion for driving as a semi-truck driver until retiring to farm in 1983. On April 17, 1955, he married Dorothy Violet Lhamon, to whom he was married for 15 years until her death on May 29, 1971. They had four children together; Mark (Donna) Miller, Irving, Texas, Nancy (James) Parrish, Jackson, Tennessee, Larry Miller, Mesquite, Texas and Ashley Miller, Fort Mill, South Carolina. On November 21, 1973, he married Betty Cooley Belville, with whom he shared 48 years of marriage. As their life began together, her three sons became his step-sons; Tom (Missy) Belville, Grove City, Ohio, David (Laurie) Belville, and Dan (Tisha) Belville. He was grandfather to their children. Marion was preceded in death by his parents, his sisters Catherine, Hazel, and Louise, his brother Virgil, his stepsons David and Dan Belville, and grandson Shawn Belville. Marion is survived by his beloved wife Betty, his brother Robert Miller, many nieces and nephews of his siblings, his four children, his stepson Tom Belville, and grandchildren Sarah Miller Keith, Chad Miller, Brittany Miller, McKenzie Miller, Casie Belville Snyder, Josh Belville, Rob Belville, Shawna Belville Speicher, Caleb Belville, and many great grandchildren. Marion loved his Lord and Savior Jesus Christ and made a public testimony of his faith in Jesus Christ when he was baptized June 22, 1955. In life, he lived out his belief and trust in Jesus and taught his children to build their lives on the word of God. (Matthew 7:24-27) He served his Lord faithfully through the churches of Christ in Northwestern Ohio, specifically the Church of Christ of Auglaize County, and in earlier years the East Elm St. Church of Christ, as a servant and Sunday school teacher. He fiercely loved his country with its freedom to worship His Lord and the many opportunities it provides. He lived for and built His life on the Lord Jesus Christ and is now in His presence. His faith is now sight. There will be a memorial service to praise His Savior and remember Marion’s life at 11 a.m. on Saturday, November 27, 2021, at the Church of Christ of Auglaize County, 15257 Blank Pike Road, Wapakoneta, Ohio. A visitation viewing from 9 a.m. to 11 a.m. Saturday morning prior to the service. Funeral arrangements are being handled by Eley Funeral Homes & Crematory, St. Rt. 501, Wapakoneta, OH 45895. In lieu of flowers, memorial contributions may be made to The Covering, 5806 Platinum Drive, Grove, City, OH 43123, or the charity of your choice

Marion H. Miller, 94, was called to his heavenly home early Sunday morning, November 21, 2021. His failing body is now made perfect, and he is with his Lord and Savior, Jesus Christ. The youngest of six children, he was born December 17, 1926,... View Obituary & Service Information

The family of Marion H. Miller created this Life Tributes page to make it easy to share your memories.

Send flowers to the Miller family.