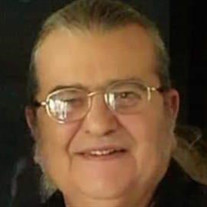 Melvin A. South, 71, of rural Wapakoneta, died 3:32 a.m., Tuesday May 5, 2020, at his residence, with his family at his side. He was born Jan. 28, 1949, in Lima, OH, the son of Edgar & Freida (Fett) South, who preceded him in death. On Dec. 24, 1969, he married Pamela E. Parsons, and she survives. Other survivors include, 2 daughters, Bethany (Jason Perez) South, Cridersville, Melanie (Justin Custer) South, Wapakoneta, 6 grandchildren, Markus, Peyten, Marlie, Kalieb, Jacob, & Alaina, a nephew, Philip (Tabitha) South, Lapeer, MI, He was preceded in death by 2 brothers and sister-in-law, Michael (Lynn) South and Bill South. Melvin retired from Ford Motor Co., Lima Engine Plant, where he held 2 journeyman cards as an electrician and skilled mechanic. He also taught diesel mechanics at UNOH, Lima. A 1967 graduate of Wapakoneta High School, Melvin was a veteran of the U. S. Navy, and served a tour of duty in Vietnam. He also received the Bronze Star while in the Navy. Melvin was a member of the Wapakoneta V.F.W. Post #8445, Wapakoneta. His hobbies included working in his garage, old Fords, NASCAR, and attending his grandson Markus’ football games. Due to current health restrictions, private family graveside services will be 11:00 a.m., Saturday, May 9, 2020, at the St. Mathews Cemetery, Cridersville. Memorial contributions may be directed to the Putnam County Hospice or the Auglaize County Humane Society. Arrangements are by the Eley Funeral Home & Crematory. Condolences may be expressed at www.eleyfuneralhomeandcrematory.com. A celebration of Melvin’s life will be held at a later date.

The family of Melvin A. South created this Life Tributes page to make it easy to share your memories.

Send flowers to the South family.