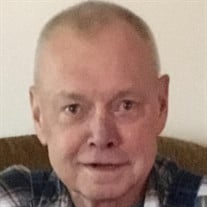 Meril W. Simpson, 65, of Wapakoneta passed away on April 24, 2020, at Lima Memorial Health System. He was born June 9, 1954, in Iowa Falls, Iowa to Louis and Phyllis (Hall) Simpson. Meril graduated from Eagle Grove Community High, Eagle Grove, Iowa in 1972. On April 27, 1974, he married Toni Norton in Eagle Grove, Iowa.  After getting a job with the railroad and moving around the country for 16 years, they settled in Wapakoneta Ohio.  Meril was employed by the City of Wapakoneta for 21 years.  He served as the Superintendent of Public Works. Meril was a member of the Fraternal Order of the Eagles, Aerie #691, Wapakoneta V.F.W. Post #8445, and the Sons of the American Legion, Post #330, all of Wapakoneta. Meril and Toni enjoyed traveling together around Ohio, the United States, and beyond.  In the past year they traveled to Arizona, Iowa and Tennessee to socialize with friends and family.   His favorite activity was spending time with family, friends, and dog Charlie.   He is survived by his wife, Toni Simpson; a sister, Pam Wagner of Des Moines, IA; sons Chris (Carrie) Simpson of Wapakoneta, OH and Adam Simpson (Jamie Doup) of Galena, OH; two granddaughters Kiesha Simpson and Madison Simpson (Nick Sidonio); great-grandson Noa Simpson brother-in-law Bill (Dawn) Norton Jr. of Boone, IA; and sister-in-law Kim (Mark) Wendon of Prescott Valley, AZ. Meril was preceded in death by his parents and brother-in-law Ervin Wagner of Des Moines, IA. A Celebration of Life service will be held at a later date after the current health restrictions are over. Arrangements are under the care of the Eley Funeral Home & Crematory, Wapakoneta, where condolences may be expressed at www.eleyfuneralhomeandcrematory.com. In lieu of flowers, memorial contributions may be directed to the Putnam County Homecare & Hospice at pchh.net or the Fraternal Order of the Eagles Aerie #691, in Meril Simpson’s name.

The family of Meril W. Simpson created this Life Tributes page to make it easy to share your memories.

Send flowers to the Simpson family.