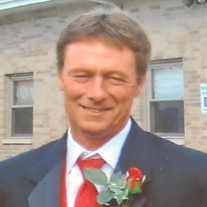 Michael “Mike” Ferguson, 60, of rural Wapakoneta, died Monday, March 8, 2021, at his home. He was born September 21, 1960, in Bellefontaine, Ohio, the son of Raymond & Jessie (Penny) Ferguson, who preceded him in death. Survivors include, a daughter, Cindy Ferguson, Canal Winchester, Ohio, life partner, Connie Myers, Wapakoneta, Connie’s children, Jeremy Lambert, Jason (Renee) Lambert, Jack (Jessica) Lambert, Jessica Myers, & Jennifer Myers, 11 grandchildren, 2 sisters, Michelle (Dennis) Oakley, Lakeview, Ohio, Melissa (Ivan) Nickerson, Parks, AR, several nieces & nephews and many family and friends. In addition to his parents, he was preceded in death by siblings, Patti Hensley, and Tom Ferguson. Mike was known for his strong work ethic, owning and operating a roofing/construction business for many years, working for The Shelly Co for the last 13 years and was a member of the Ohio Laborers Union #329. He enjoyed working with his hands, helping others, and fishing. Mike was a friend to anyone who knew him. In keeping with Mike’s wishes, there are no services planned. Arrangements are under the care of the Eley Funeral Home & Crematory, Waynesfield, OH, where condolences may be expressed at www.eleyfuneralhomeandcrematory.com.

The family of Michael "Mike" Ferguson created this Life Tributes page to make it easy to share your memories.

Send flowers to the Ferguson family.