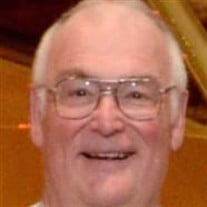 Michael A. “Mike” Miller, 67, of Wapakoneta, died 6:22 p.m., Sat. May 18, 2019, at Lima Memorial Health System, following a sudden illness. He was born in Lima, June 19, 1951 to Robert “Bob” and L. Jean “Jeanie” Miller, who proceeded him in death. He has one brother, Robert “Bo” (Rosalie) Miller surviving. In 1973, he married Laura Johnston and three children: Jamie, Nicky, and Angie (Scott) Dickman, all of Wapakoneta. He also has 3 grandchildren Brayden, Kaylee and Avery, who were his pride and joy.  Mike graduated from Wapakoneta High School in 1969 and after offers to play football and baseball at multiple colleges, decided to attend and play baseball at the University of Toledo. After an accident to his pitching hand his senior year in college, he hung up his cleats and left school.  Mike worked at Emerson Climate Technologies (Copeland Corporation) for 36 years.  Mike was passionate about, and lived his life for, his faith, his family and his community.  After getting married and returning to Wapakoneta, he joined his father and brother coaching the Wapakoneta Warriors midget football team that his father has started in 1968. In 1978, Mike started the Wapakoneta Cherokees midget football team and coached the team for 19 years. He took great pride in teaching the kids the fundamentals of football and making sure that every kid that was on his team was able to play every game. Winning was not the goal, learning the basics for the future Redskins was. In the early 90’s he also helped start the junior high softball club team that is now the school team.  In order to keep himself busy after retiring, he volunteered to be an announcer at the Wapak Redskin 7th - JV football, varsity baseball and softball games. This past year he also returned to midget football coaching for his grandson’s team and was involved with the newly created Wapak Midget Football Association.  Mike had an absolute passion for teaching kids the fundamentals and basics of many sports even up to the last hour he was alive.  In addition to sports, Mike had a passion for singing and serving others. He entertained the residents of multiple area nursing homes several times a month, singing and playing songs that he had written or from cd tracks.  Mike’s faith was also extremely important to him. He and his family have attended Only Believe Ministries Christian Center for over 34 years where Mike was heavily involved with the kids and nursing home ministry.  Funeral services will be 10:30 a.m., Thurs. May 23, 2019, at the Only Believe Ministries Christian Center, Botkins, with Pastor Peter Doseck officiating. Burial will be at a later date. The family will receive family and friends 2-8 p.m., Wed. May 22, at the Eley Funeral Home & Crematory, 1102 Lincoln Ave. (St. Rt. 501) Wapakoneta, and 1 hr. prior to the service, Thurs. at the church. In lieu of flowers, memorial contributions may be directed to the family to be used for a charity to be named later.

The family of Michael A. "Mike" Miller created this Life Tributes page to make it easy to share your memories.

Send flowers to the Miller family.