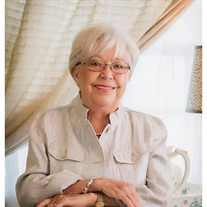 Mona Louise Griffin Albertson, 87, a long time resident of Perry, Oklahoma, died at her home in Cridersville, Ohio, on Thursday evening, December 2, 2021, with her family at her side. Mona was born June 26, 1934, near Konawa, Oklahoma, the daughter of the late Bub and Wayman (Archer) Griffin. She married Philip Earl Albertson on August 18, 1956. They celebrated 50 years together before he preceded her in death on October 2, 2006. Mona is survived by her brother Matthew McCrary Griffin (Jo), Fort Smith, AR; her children Philip Earl Albertson, Jr., Indianapolis, IN; Amy Louise Albertson Bridges (John), Los Gatos, CA; Michael Earl Albertson (Paula), Mustang, OK; Sarah Beth Albertson Wilcox (David), Wapakoneta, OH; her grandchildren Rohn Albertson, Tabitha Albertson, Audrina Albertson, Sarah Bridges, Brittany Albertson Shaub, Kristen Albertson Dennis, Sierra Albertson Occhipinti, Curtis Novotony, Garrett Wilcox; and nine great grandchildren. Mona grew up on a farm outside Maysville, Oklahoma where she was active in 4H and the school band, and graduated from High School. She was one of two women in the Oklahoma University College of Pharmacy graduating class of ’56 and maintained her license into her 80s. That same year she walked across the stage to accept her diploma, she also walked down the aisle to marry her ‘fly boy’ and the love of her life, Phil Albertson. Mona worked as a pharmacist while Phil finished his Engineering degree at Oklahoma State University, where she started the Engineering Students’ Wives Club.  They moved to Perry when Phil started working full time at Ditch Witch, and there built a house and a home (dubbed “Nostrebla”). Mona kept busy, holding offices in the Mid-North Region and Oklahoma State Professional Engineers Auxiliary, the Federation of Women’s Clubs, and the American Association of University Women. Locally, she was active in the Garden Club, League of Women Voters and the Republican Party. Mona’s other activities eventually gravitated mostly around family. She was Phil’s most ardent cheerleader and supporter. She shifted to part time pharmacy work and her time was soon filled with activities that revolved around church, school, sports, music, and scouts, involving days full of ‘taxi service’. She was a member of the Perry PTA, which was nice, but in a kid’s eyes what counted was that she always brought cupcakes to classrooms for birthdays, went on class picnics, even showed up dressed in Michael’s football uniform for a halloween party. She attended almost every football game, awards assembly, and band contest, even chaperoning for out of town events. For fifteen years Mona was business manager, parent relations manager and costume designer for the Show Biz School of Dance, first with Amy and later with Sarah Beth. Mona loved people and loved blessing people with an attentive ear, a hug, and small gestures of random kindness. She lead her family towards faith in God, and taught her children the importance of manners, reading and education, integrity, goodness, thoughtfulness, family unity, and tradition. She will be greatly missed. Though her last years were in Ohio, the home of her heart was Nostrebla, the house on the hill outside Perry. She and her flyboy will meet the resurrection, side by side, in Grace Hill Cemetery.  Funeral services will be 2:00 p.m., Fri. Dec. 10, 2021, at Perry Church of Christ, 7th & Jackson Sts., Perry, OK, Burial is to follow in the Grace Hill Cemetery, Perry. The family will receive family and friends 12:00 p.m. until time of the service, Fri. at the church. In lieu of flowers please make memorial contributions to Folds of Honor. Arrangements are under the care of the Brown-Dugger Funeral Home, Perry, OK, and the Eley Funeral Home & Crematory, Wapakoneta, OH.

Mona Louise Griffin Albertson, 87, a long time resident of Perry, Oklahoma, died at her home in Cridersville, Ohio, on Thursday evening, December 2, 2021, with her family at her side. Mona was born June 26, 1934, near Konawa, Oklahoma, the daughter... View Obituary & Service Information

The family of Mona Louise Albertson created this Life Tributes page to make it easy to share your memories.

Send flowers to the Albertson family.