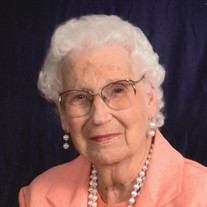 Nellie A. (Lietz) Montgomery, 99, of Wapakoneta, entered the gates of Heaven on January 12, 2022, at Otterbein in Cridersville. She was born July 17, 2022, in St. Marys Ohio, the daughter of Dewey Lietz and Goldie Hole Lietz Waldo. On June 3, 1941, she married Warren C. Montgomery, who died July 19, 1997. Mrs. Montgomery is survived by a daughter and son-in-law, Sandra and Paul Blair of Wilson, Kansas; son and daughter-in-law, Kenneth and Patricia Montgomery of Fenton Missouri; grandchildren Richard Miller, Lyn (Tim) Severt, Deanna (Dan) Chappie, Christina (Bryant) Hensley, Morgan (Linda Longfritz) Hoover, Leslie (Walter)Kessinger, Herbert (Adrian Elam) Argabright II, Curt ( Chrissy) Martin, Trish (Dan) Stepp, Meghan (Marti Weber) Montgomery, Troy and Tony Montgomery; 23 great-grandchildren; sisters-in-law Betty Lietz of Wapakoneta and Sue Montgomery of Coralville, Iowa. She was proceeded in death by her parents, brother Robert Lietz; brother and sister-in-law William “Hafe” and Rita Kreitzer Lietz; daughter Janet Barber; son Keith Montgomery and great granddaughter, Jessica Miller. Mrs. Montgomery graduated from Blume High School, Wapakoneta, in 1940 and was a lifelong member of St. Paul United Church of Christ, Wapakoneta, where she served on the reception committee and was a life member of the Veterans of Foreign Wars Auxiliary Post 8445 in Wapakoneta and later Post 9289 of Saint Marys. She also belonged to the Grand Lake Fishing Club where she served as president. Her entire adult life consisted of volunteering. For many years she served on the resident council at Auglaize Acres and helped take residents on field trips to the Auglaize County Fair and Grand Lake St. Marys. She baked hundreds of cakes and pies for events in and around Wapakoneta. For 17 years she served as treasurer of the VFW Auxiliary Post 8445 in Wapakoneta. In October of 1998, Mrs. Montgomery was selected as achiever of the month by WKKI Radio in Celina, Ohio. She was a Republican precinct committeewoman for Wapakoneta Ward 3A and worked each election. When necessary, she would bring seniors to the polls. Mrs. Montgomery was presented with aa award of appreciation from the Auglaize County Republican Party, on her 95th birthday. Mrs. Montgomery enjoyed spending time with family and friends. In her free time, she enjoyed traveling, crocheting, playing cards and bowling. A memorial service will be held on Monday, January 17, 2022, at Eley Funeral Home, Wapakoneta with Rev. Becky Sunday officiating. Burial of the cremated remains will be at Resthaven Memorial Gardens near Moulton at a later date. The family will receive friends from 12:00 pm to 2:00 p.m., with the service beginning at 2:00 pm. Memorial Contributions may be made to: The Wounded Warriors Project or The Tunnel of Towers Foundation. Condolences may be expressed at www.eleyfuneralhomeandcrematory.com.

Nellie A. (Lietz) Montgomery, 99, of Wapakoneta, entered the gates of Heaven on January 12, 2022, at Otterbein in Cridersville. She was born July 17, 2022, in St. Marys Ohio, the daughter of Dewey Lietz and Goldie Hole Lietz Waldo. On June... View Obituary & Service Information

The family of Nellie A. Montgomery created this Life Tributes page to make it easy to share your memories.

Send flowers to the Montgomery family.