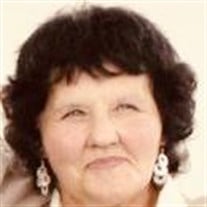 Parmella Marie Smith , 67, of Lima, passed into the arms of Jesus on Thurs. Aug. 15, 2019, at the Lima Manor. . Marie was born June 14, 1952 in Augusta, Georgia. She was the daughter of Wayne and Mildred Parham Smith. She was preceded in death by her parents and her brother Phillip Wayne Smith and her fiancé Gerald Larson. She has one surviving sister, Juanita Sue Smith, residing in Ashville, NC, a sister-in-law, Lena (Glen) Webb of Lima, OH; a niece, Angie (John) Carnes of Wapakoneta, OH; a nephew, Chad (Melissa) Smith of Louisville, KY and a first cousin, Terry (Ann) Adkins, of Tupelo, MS. Marie was a faithful member of the Trenton church of Christ in Trenton, Georgia where she was baptized as teem. Her family moved to Abilene, Texas where she attended Abilene Christian High School earning her H.S. diploma, then attended 4 years at Abilene Christian College earning a minor in Bible. Later she moved to Hobbs, New Mexico where she and her mother lived near her brother. She moved back to Trenton with her mother to help care for her aging grandmother until her death. Marie also cared for her mother until her death in Wapakoneta, Ohio. Since her mother’s death, Marie has attended services both at the Church of Christ of Auglaize County in Wapakoneta and at the Kibby St. Church of Christ in Lima. Marie suffered much illness during her lifetime, but she always had a kind word, a funny story and a laugh that everyone who knew her enjoyed. She was an extremely kind and giving person, helping anyone that asked her for help. She enjoyed sharing the Bible and was involved in World Bible School her entire adult life completing hundreds of correspondence course lessons with people seeking the Lord. A Memorial service will be held 1:00 p.m., Sun. Aug. 25, 2019, at the Church of Christ of Auglaize County, 15257 Blank Pike, Wapakoneta, with Ministers Pat Powers and John Barcus officiating. Memorial contributions can be given to World Bible School, 1901 Schillinger Rd., Mobile, AL 36695. Arrangements are being conducted by the Eley Funeral & Crematory, Wapakoneta where condolences may be expressed at www.eleyfuneralhomeandcrematory.com.

Parmella Marie Smith , 67, of Lima, passed into the arms of Jesus on Thurs. Aug. 15, 2019, at the Lima Manor. . Marie was born June 14, 1952 in Augusta, Georgia. She was the daughter of Wayne and Mildred Parham Smith. She was... View Obituary & Service Information

The family of Parmella Marie Smith created this Life Tributes page to make it easy to share your memories.

Parmella Marie Smith , 67, of Lima, passed into the arms of Jesus...

Send flowers to the Smith family.