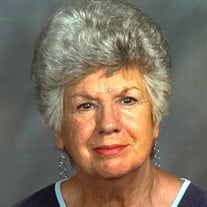 Patricia M. “Pat” Black, 85, of Wapakoneta, formerly of Sarasota, FL, and Dayton, OH, died at 6:55 p.m., Sun. June 28, 2020, at the Wapakoneta Manor. She was born Feb. 23, 1935, in Roanoke, VA, the daughter of Charles & Margaret (Wright) Neary, who preceded her in death. Survivors include, 2 sons, Donald Hensley, Huber Heights, OH; David Hensley, NV; a sister, Gaeleen Chamness, Wapakoneta, OH; a brother, Michael Neary, Dayton, OH; several nieces & nephews. She was preceded in death by a brother, Timothy Neary, a sister-in-law, Sharon Neary and a brother-in-law, Richard Chamness. Pat worked at Globe Industries, Dayton, OH, and then she worked at Sun Hydraulics, Sarasota, FL, for over 35 years. She was a member of St. Joseph Catholic Church, Wapakoneta. Pat was a graduate of Julienne High School, Dayton, and a member of the Fraternal Order of the Eagles, Sarasota, FL. She enjoyed dancing, playing cards, and spending time with friends and family. Funeral services will be held at a later date. Memorial contributions made be directed to the Wapakoneta Manor. Arrangements are under the care of the Eley Funeral Home & Crematory, Wapakoneta, where condolences may be expressed at www.eleyfuneralhomeandcrematory.com.

The family of Patricia M. "Pat" Black created this Life Tributes page to make it easy to share your memories.

Send flowers to the Black family.