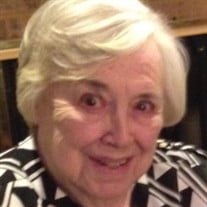 Patricia Griffin Moulis, age 96, passed away at midnight May 15, 2020 at Otterbein Cridersville. Pat was born on March 12, 1924 in Youngstown, Ohio to the late Alma Latteau Griffin Schaefer and Patrick Richard Griffin. Her father died when she was a young child, and she was raised by her mother and stepfather Anthony J. Schaefer. She attended Mary Washington College and graduated from Johns Hopkins School of Nursing in 1948. On August 21, 1948, she married Col. Wallace James Moulis who died July 10, 2003. Pat spent the majority of her life as a career Army wife. She lived in Germany and on military bases from Hawaii to Louisiana to Virginia (and several states in between), where she and her husband raised six children (Army brats). Pat was a pioneer before women were appreciated as such; after a 15-year career as a registered nurse, she retired from Alexandria Hospital in Alexandria, Virginia. Pat read voraciously, loved history, playing bridge, collecting jewelry, and bragging about her grandchildren and great grandchildren. She was an incredibly talented watercolorist, and held a deep appreciation for the arts. She loved treating her grandchildren to the ballet, a museum, and out to afternoon tea. Pat enjoyed fine dining and never passed up a chance for dinner out; the Jazz Brunch at Commander’s Palace was her happy place. Those that love her will remember Pat for her hearty laugh and her remarkable intellect. Pat is survived by three children: Mary Jane Bredemus, Stephanie (Mark) Spees, and John (Michelle) Moulis, 11 grandchildren and 14 great grandchildren. She was preceded in death by her husband, daughter Jean Hollier, sons Wallace James Moulis Jr. and Michael A. Moulis, sister Jeanne Griffin Lewis, grandson David Moulis, and great grandson Tyler Hollier. A private family memorial service will be held in Arlington National Cemetery at a later date. Arrangements are being conducted by the Eley Funeral Home & Crematory, Wapakoneta, OH, where condolences may be expressed at www.eleyfuneralhomeandcrematory.com. Memorial contributions may be directed to St. Joseph Catholic Church.

Patricia Griffin Moulis, age 96, passed away at midnight May 15, 2020 at Otterbein Cridersville. Pat was born on March 12, 1924 in Youngstown, Ohio to the late Alma Latteau Griffin Schaefer and Patrick Richard Griffin. Her father died when... View Obituary & Service Information

The family of Patricia Griffin Moulis created this Life Tributes page to make it easy to share your memories.

Patricia Griffin Moulis, age 96, passed away at midnight May...

Send flowers to the Moulis family.