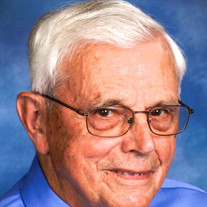 Richard T. “Dick” Craft, 93, of rural Wapakoneta, died 9:07 p.m., Friday, May 24, 2019, at Wapakoneta Manor with his family at his side. He was born Jan. 5, 1926, in Botkins, OH, the son of Theodore & Anna (Fehringer) Craft, who preceded him in death. On Oct. 15, 1955, he married Lois Ann Presar, and she preceded him in death on June 12, 2008. Survivors include, 3 children, Judy (Dave) Steinke, Wapakoneta, Jim Craft, Columbus, OH, & Cathy (Dan) Lambert, Buckland, 3 grandchildren, Jenny (Jimmy) Failla, Matt (Jena) Steinke, & Deron (Kim) Steinke, 5 great grandchildren, Lincoln Failla, Isaiah, Hailey, Hunter, & Maddison Steinke. In addition to his parents & his wife, Lois Ann, Dick was preceded in death by a daughter, Diane Craft, and 2 sisters and spouses, Mary (Henry) Hageman, and Mildred (Adrain) Sheipline. Dick retired in 1988, as a tool & die maker with Superior Tube Co., Wapakoneta, after over 30 years of service. He later worked at Provico of Wapakoneta. He was a graduate of the Botkins Local High School and was a veteran of the U.S. Army. Dick was a member of the St. Joseph Catholic Church, and the Knights of Columbus, Council #1272, both of Wapakoneta. His hobbies included, playing cards, gardening, traveling, and raising farm animals. He was also a fan of the Cincinnati Reds. Family was always first with Dick as he enjoyed spending time with his children & grandchildren. Mass of Christian Burial will be 10:30 a.m., Fri. May 31, 2019, at the St. Joseph Catholic Church, Wapakoneta, with Rev. Sean Wilson officiating. Burial is to follow in the St. Joseph Catholic Cemetery, Wapakoneta, where military rites will be conducted by the Wapakoneta V.F.W. Post #8445. The family will receive family & friends 2-8 p.m., Thurs. May 30, and 9:00 a.m.- 9:45 a.m., Fri. at the Eley Funeral Home & Crematory, 1102 Lincoln Ave. (St. Rt. 501) Wapakoneta. Memorial contributions may be directed to the Alzheimer’s Foundation, the St. Joseph Catholic Church Youth Ministry Program, or the Botkins Educational Foundation.

The family of Richard T. "Dick" Craft created this Life Tributes page to make it easy to share your memories.

Send flowers to the Craft family.