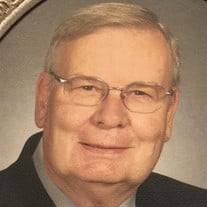 Richard E. “Dick” Luebrecht, 83, of Wapakoneta, passed away, Tues, morning, Oct. 30, 2018, at his home following a sudden illness. He was born Dec. 9, 1934, in Lima, OH, the son of Elmer & Luella (Meyer) Luebrecht, who preceded him in death. On Oct. 15, 1960, he married Judith J. Smith and she survives. Other survivors include, 3 children, Lisa (David) Schaaf, Lima, Kathy (Steve) Martin, Wapakoneta, & Richard “Rick” Luebrecht, Delaware, OH, 6 grandchildren, Wayne (Cassie) Schaaf, Christopher Schaaf, Beth (Rob) Seifley, Steven (Erika) Martin, Emily Martin, & Katie Martin, 4 great grandchildren, Sophia, Lauren, Avery, & Willow, siblings, John (Anne) Luebrecht, Dayton, OH, Daniel (Carol) Luebrecht, Wapakoneta, Juanita (Bill) Townsend, Wapakoneta. In addition to his parents, he was preceded in death by a brother, Lester Luebrecht. Dick retired in 1994 from Westinghouse-Sunstrand as an engineering technician after 38 years of service. He thoroughly enjoyed his work at Westinghouse, and he received 4 patents while working on different aerospace projects He was a graduate of St. Joseph High School, Wapakoneta and attended Ohio Northern University. Dick was a member of St. Joseph Catholic Church, Wapakoneta, and the Fraternal Order of the Eagles, Aerie #691, both of Wapakoneta. He was a veteran of the U.S. Army. He was an avid do it your selfer and built 11 homes, including his own and his daughter’s. He enjoyed playing bridge and played weekly at the Eagles and the St. Marys Senior Citizen Center. Dick also enjoyed restoring old cars, and was particularly proud of his 1956 Pontiac Star Chief. He and Judy loved to travel and just returned from a trip to Ireland. Mass of Christian Burial will be 10:30 a.m., Fri. Nov. 2, 2018, at the St. Joseph Catholic Church, Wapakoneta, with Rev. Sean Wilson officiating. Burial is to follow in the St. Joseph Catholic Cemetery, Wapakoneta, where military rites will be conducted by the Wapakoneta V.F.W. Post #8445. The family will receive family and friends 2-4 & 6-8 p.m., Thurs. Nov. 1, at the Eley Funeral Home & Crematory, 1102 Lincoln Ave. (St. Rt. 501) Wapakoneta. Memorial contributions may be directed to the St. Jude Children’s Research Hospital. Condolences may be expressed at www.eleyfuneralhomeandcrematory.

The family of Richard Elmer Luebrecht created this Life Tributes page to make it easy to share your memories.

Send flowers to the Luebrecht family.