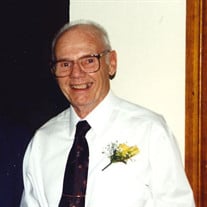 Robert R. “Bob” Bogart, 98, of Wapakoneta, died 5:55 p.m., Wed. May 1, 2019, at the Auglaize Acres. He was born June 1, 1920, in Wapakoneta, the son of Russell & Ethel (Burden) Bogart, who preceded him in death. On June 9, 1946, he married Lois I. Harshbarger, who died Dec. 23, 2012. Survivors include, 3 children, Susan Miller, Wapakoneta, Douglas (Koi) Bogart, Thailand, Timothy (Jeanne) Bogart, Murrells Inlet, SC, 7 grandchildren, Jeff Ritchie, Greg (Nicki) Ritchie, Jason Bogart, Matthew Bogart, Steven Bogart, Thomas H. Miller, & Tabatha Sheely, 14 great grandchildren 13 great great grandchildren, He was preceded in death by a son-in-law, Thomas G. Miller, a great granddaughter, Ivy Sheely, and a sister, Kathryn Weaver. A certified mechanic, Bob worked for Niswonger’s Chevrolet for 19 years, the Lima Ordinance Depot and later transported cars for Mike Swaney. Bob was a U.S. Army Air Corps Veteran. He served with the 20th Air Force in the China-Burma-India Theatre, during W.W.II, where he was a Tail Gunner on a B-29. During his time in the Air Corps he earned several medals; Presidential Unit Citation, Distinguished Flying Cross, Asiatic Pacific Battle Ribbon with 4 Stars, Air Medal with 2 Oak Leaf Clusters, and the Good Conduct Ribbon. He was a life member of the Wapakoneta V.F.W. Post #8445. He attended the First English Lutheran Church and was a 1939 graduate of Blume High School. He enjoyed walking and riding his bicycle and motorcycle. The family would like to thank the caring staff at the Auglaize Acres for their services and the kindness they showed toward Bob. Funeral services will be 10:30 a.m., Mon. May 6, 2019, at the First English Lutheran Church, Wapakoneta, Pastor Steve Nelson officiating. Burial will be at a later date in the Greenlawn Cemetery, Wapakoneta, where military rites will be conducted by the Wapakoneta V.F.W. Post #8445. The family will receive friends from 2-4 p.m. Sun. at the Eley Funeral Home and Crematory and 1 hr. prior to the service at the Church. Memorials may be directed to the First English Lutheran Church or to St. Rita’s Hospice.

The family of Robert R. Bogart created this Life Tributes page to make it easy to share your memories.

Send flowers to the Bogart family.